When you ask Maria Contreras about the day she met her “sister,” she lights up like a firecracker. “Oh, my God, my heart started going ‘boom, boom, boom,’” exudes Maria, 54, a native of Puerto Rico who now lives in Cleveland, Ohio. “I was waiting so long for this moment to meet her that I hugged her, I kissed her and I jumped!”

Monica Davis, 58, of Elyria, Ohio, feels similarly about the woman with whom she shares a portion of a life-saving liver from a deceased donor. “Going through liver disease was hard but also a good thing, in a sense, because I got a sister out of the deal. She is a wonderful and beautiful soul.”

Maria, a grandmother of two, and Monica, a grandmother of four, met in person for the first time in April 2022, about 21 months after each underwent a split-liver transplant, a rare procedure where surgeons divided a liver from a deceased donor into two distinct portions then implanted one section into each adult patient. Monica received 60% of the donor’s liver, Maria received 40%. 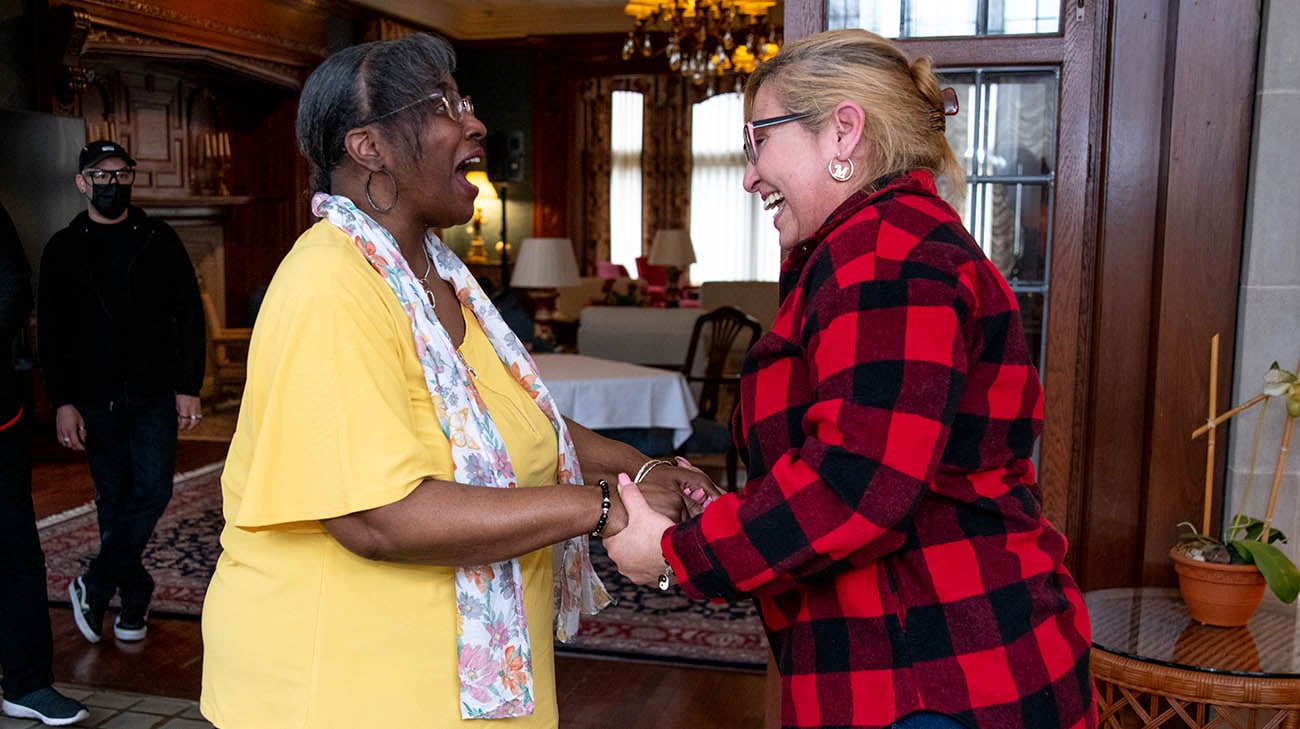 Monica (left) and Maria (right) were joined by family when they met for the first time after undergoing a split-liver transplant. (Courtesy: Cleveland Clinic)

Split-liver transplants were first performed in Germany in the late 1980s in an attempt to provide the proper-sized organ for children. In a child-adult split-liver transplant the child receives 20% of the donor liver, the adult receives 80%. Although more complex to perform, the procedure has evolved and is now used by some physicians as a way to save two adults.

"There’s currently no other liver transplant technique that can save multiple lives from one donor,” says Dr. Hashimoto, who is Cleveland Clinic’s director of liver transplantation. “Besides the deceased donor’s liver needing to be almost perfect to be split in two portions to save two adult lives, you also need patients who are waiting for a liver and are good candidates split-liver transplant. You have to be high enough on the transplant list but stable enough to undergo this type of surgery.”

Doctors diagnosed Maria with liver failure in 2014. Soon after she was accepted onto the national United Network for Organ Sharing (UNOS) transplant list. At the time, the only symptoms she experienced were severe itching in her feet and neck. She was surprised when she learned her diagnosis. 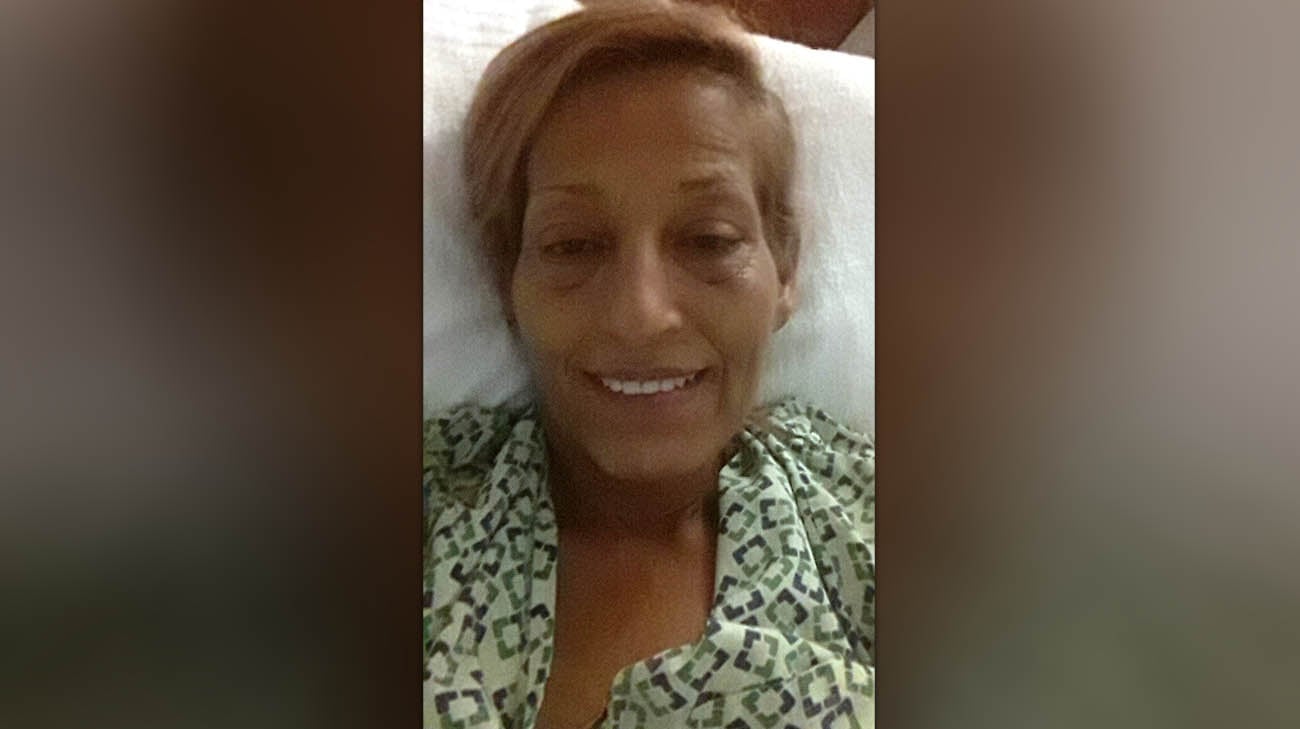 Maria had been in and out of the hospital after receiving a liver failure diagnosis in 2014. (Courtesy: Maria Contreras)

Cirrhosis prevented her liver from efficiently processing red blood cells. Maria became jaundiced with her skin and the whites of her eyes becoming yellow in color. “I would wear sunglasses all the time because my eyes were so yellow,” she recalls.

When medication failed to prevent the progression of the disease during treatment at another hospital, Maria switched her care to Cleveland Clinic. While waiting for an organ, she almost died in 2019 when her liver was unable to properly process a drug she required for an unrelated heart problem which resulted in excessive bleeding.

“My liver was very bad,” Maria recalls, “and my body didn’t work the way it’s supposed to.”

Monica’s diagnosis came in 2013, when she began having severe pain in her abdomen. A liver biopsy revealed she had cirrhosis caused by primary sclerosing cholangitis (PSC), a liver disease that damages the bile ducts. 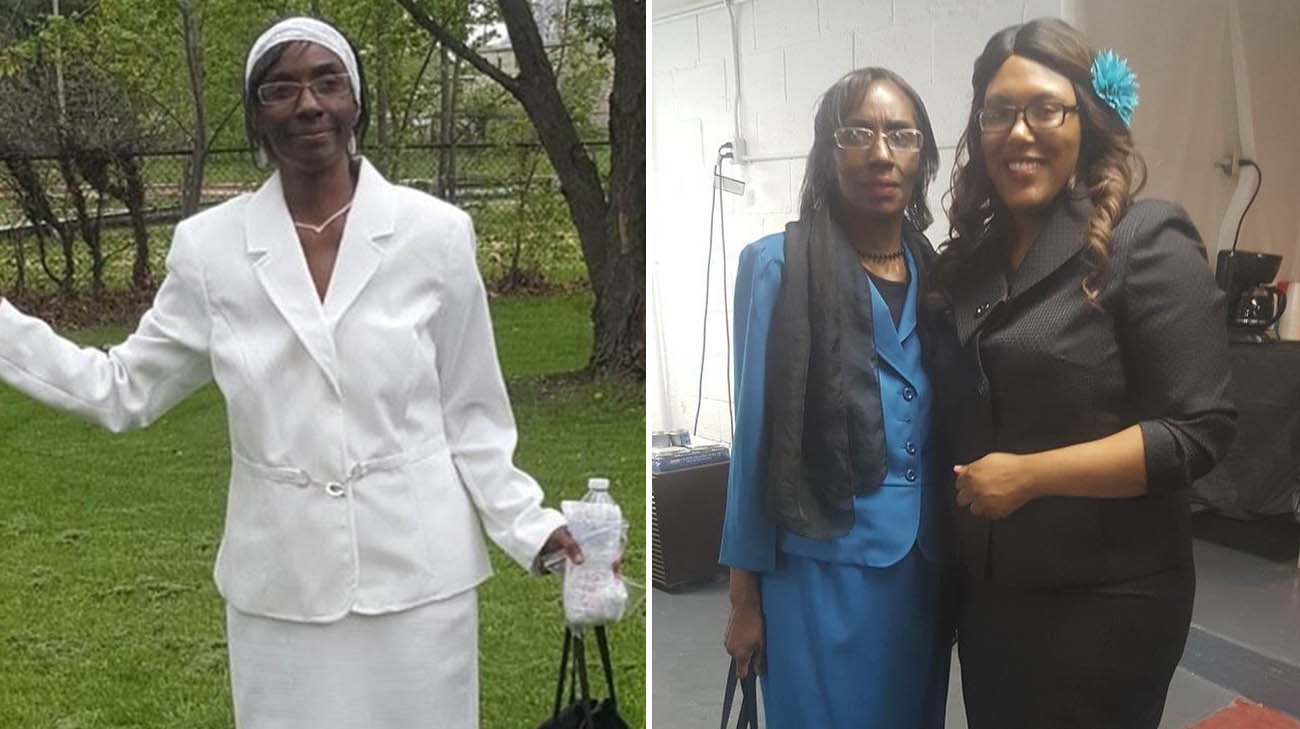 Monica lost a significant amount of weight due to her health complications over the years. She says she rarely wanted to take photos, except a few she captured from church, including one with her daughter (right). (Courtesy: Monica Davis)

When she discovered the only option for long-term survival was a transplant, Monica first declined to be added to the UNOS transplant list, reasoning her children were grown, her husband was self-sufficient and she didn’t think they would need her anymore.

She thanks her family, faith in God, her pastor and fellow congregants for helping encourage her to change her mind. “I never thought I would want to leave this earth,” Monica admits. “But sometimes, your mind goes in different directions and takes you places you didn’t think you could go. I had to reinforce my faith, belief and trust in God.” 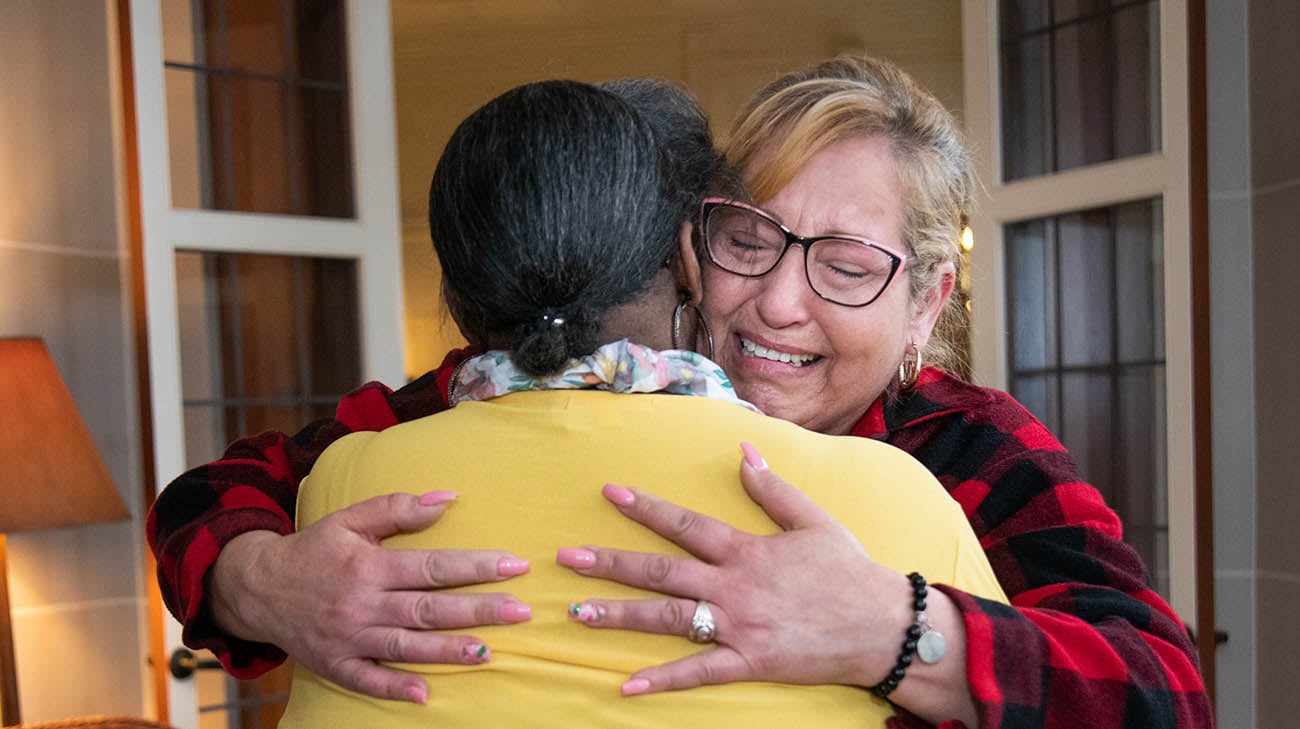 Maria and Monica met for the first time in April 2022. (Courtesy: Cleveland Clinic)

When a liver became available – for both women – in July 2020, they were thrilled to learn from their transplant coordinator, Cassandra Bray, they would be sharing the organ with another recipient.

“I never would have thought the kind of transplant we had would be possible. That is incredible,” marvels Monica. Adds Maria, “I was surprised we would both have an opportunity for a new life. I am so grateful for that.”

Before getting wheeled into the operating room, Maria says Dr. Hashimoto told her everything was going to be okay and gave her a fist bump. “It made me feel more confident, and now I do it any time I see him,” Maria shares. 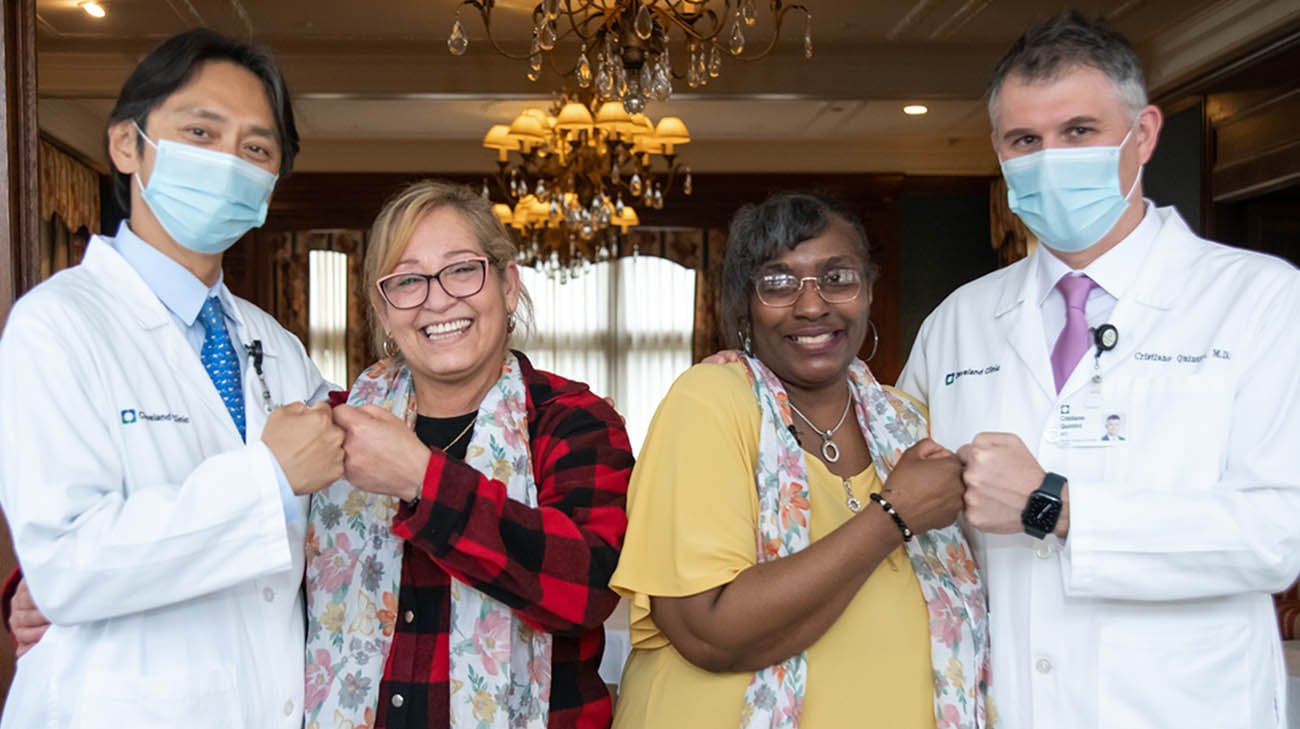 (left to right) Dr. Hashimoto, Maria, Monica and Dr. Quintini. Before going into the operating room, Maria says Dr. Hashimoto reassured her everything was going to be okay and gave her a fist bump. Now, every time she sees him she returns the gesture. (Courtesy: Cleveland Clinic)

While Dr. Hashimoto was performing the transplant of the donor’s left lobe into Maria, Cristiano Quintini, MD, liver transplant surgeon and chair of the Digestive Disease Institute at Cleveland Clinic Abu Dhabi, was doing likewise for Monica with the larger right lobe. Each woman emerged from the surgeries without complications and recovered quickly. Both Maria and Monica have blossomed with their portion of the regenerative organ, which grows to be a standard size approximately six to eight weeks after transplant.

“They are doing great,” notes Dr. Hashimoto, who published a study that found recipients of a split-liver transplant have survival rates comparable to recipients of a whole liver.

“I know Maria agrees, every day we keep our donor and their family uplifted in prayer,” says Monica. “If it hadn’t been for God, our care team and our donor, we wouldn’t be standing here. We never take that for granted.” 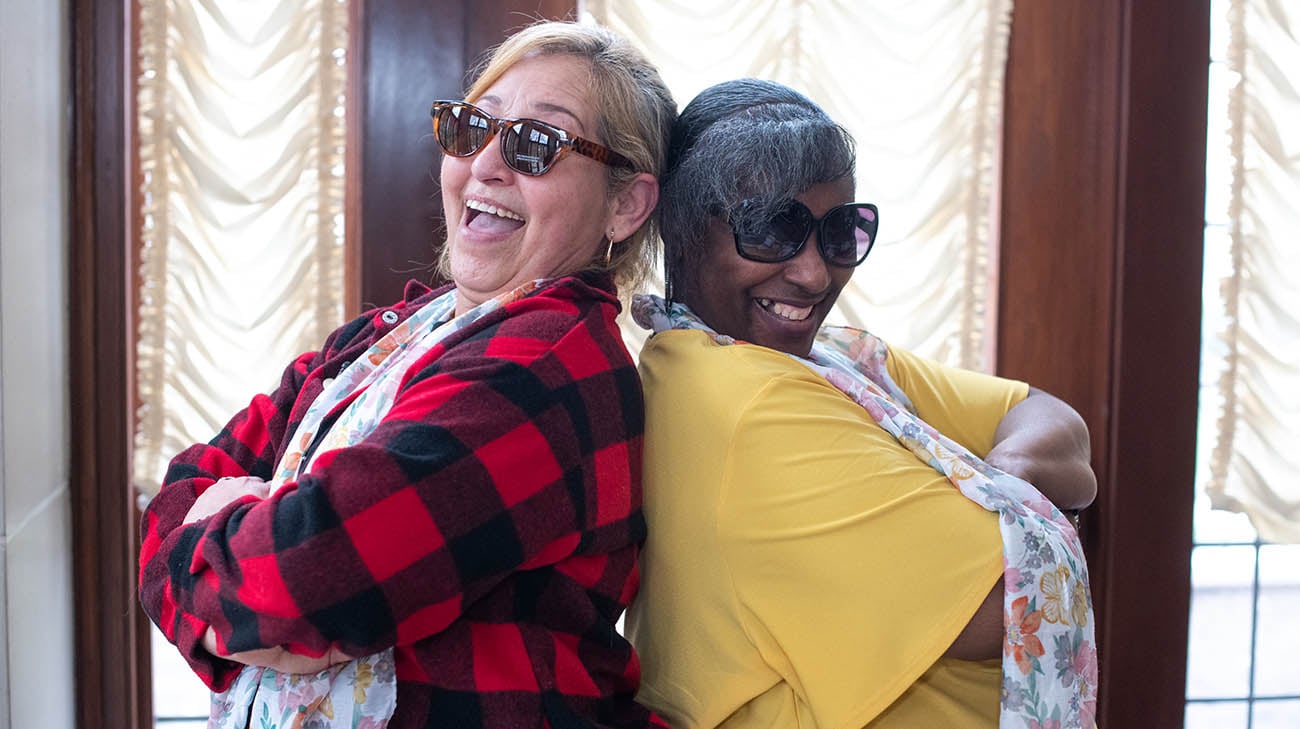 They love sharing the story of their sisterhood. Monica is looking forward to spending more time with Maria, who she’s counting on to teach her how to salsa dance. Maria is excited Monica is going to show her shopping tricks and tips.

“I love my two sisters-in-law, but this is different,” Monica states. “Maria and I actually have a connection, inside our bodies. We may not look alike, but we’re sisters, heart and soul.”