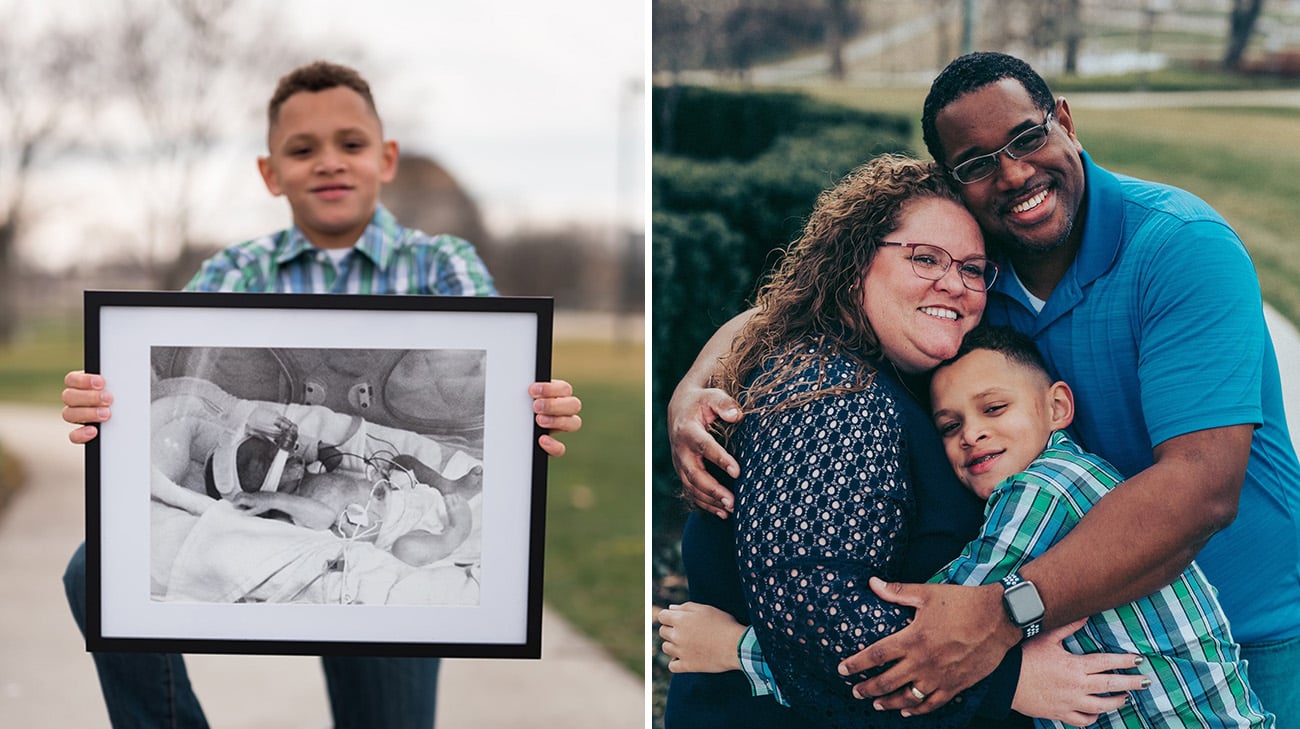 When doctors at Cleveland Clinic Hillcrest Hospital informed Tera Johnson and her husband, Treye, their baby would need to be delivered early, they shared the same thought. “I remember us talking about it. We didn’t have the baby’s room painted and didn’t have a crib yet,” recalls Tera. “And then one of the nurses said to us, ‘You’re not taking the baby home when he’s born.’ That’s when it hit us. You don’t plan to go to the hospital and leave without your child.”

That moment was the Johnsons’ introduction to what life would be like in the hospital’s neonatal intensive care unit (NICU) once their son, Quentin (who they call Q), was born by emergency cesarean birth (C-section) at just over 26 weeks gestation. The early delivery was necessary because Tera’s life was in danger, due to a rare pregnancy complication called HELPP syndrome. 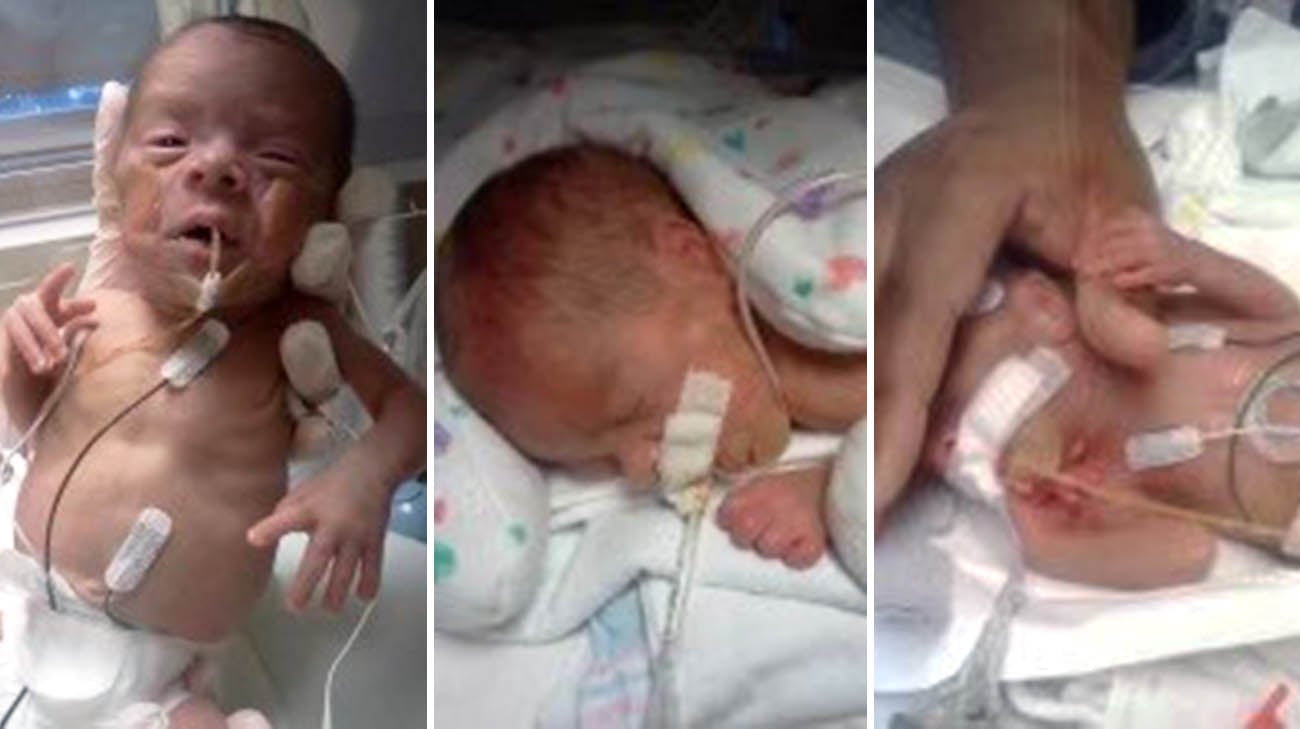 Quentin weighed 1 pound, 14 ounces, when he was born and measured slightly over one foot long. (Courtesy: Tera Johnson)

Q was tiny, weighing just 1 pound, 14 ounces, and measuring slightly over one foot long. The ensuing 98 days, the extent of Quentin’s stay in the NICU, continues to resonate with the family 10 years later.

“It was a long, wild ride,” says Tera. “But we had the most amazing care --Quentin and us. They made sure we were in the know the entire time.”

The Hillcrest NICU is one of just 70 in the U.S, and one of two in Ohio, that is part of the March of Dimes NICU Family Support program, which offers educational and moral support for families in the NICU during their baby’s time in the hospital.

Therese Razzante has been the manager of the program since its inception in 2012, and the Johnsons were one of the first families she aided. She clearly remembers their initial emotional struggles upon having a premature baby, and how they rallied with the aid of NICU nurses like Jackie Ludwig, other caregivers on Q’s care team and fellow NICU parents organized by Therese.

“I’m not a nurse, but I can draw on my own life experiences to help the families on their journey,” says Therese, who raised six sons of her own. “I talk to them, and pray with them, and help them anyway I can. It’s important to acknowledge what they are going through and let them know they aren’t alone as they work through their feelings.”

The emotional burden faced by parents whose babies are in the NICU is eased, Therese believes, when they participate in the weekly family support group meeting she has held every Wednesday evening since just before Quentin was born. She encouraged Tera and Treye to attend the meetings soon after Quentin’s birth, but they were initially hesitant.

“We had both gone back to work because we wanted to save our time off for when we brought Q home,” explains Tera. “We only had a limited amount of time with him every day and didn’t want to take away from that. But we did attend, and it was one of the best decisions we’ve ever made. It was amazing to connect with other families who were living the same life we were living every day.”

Jackie, who was in the operating room for Q’s birth, recalls that first Family Support Group meeting Tera and Treye attended. She was there, along with a neonatologist, to answer any questions the parents had. She noticed Tera crying during the meeting. 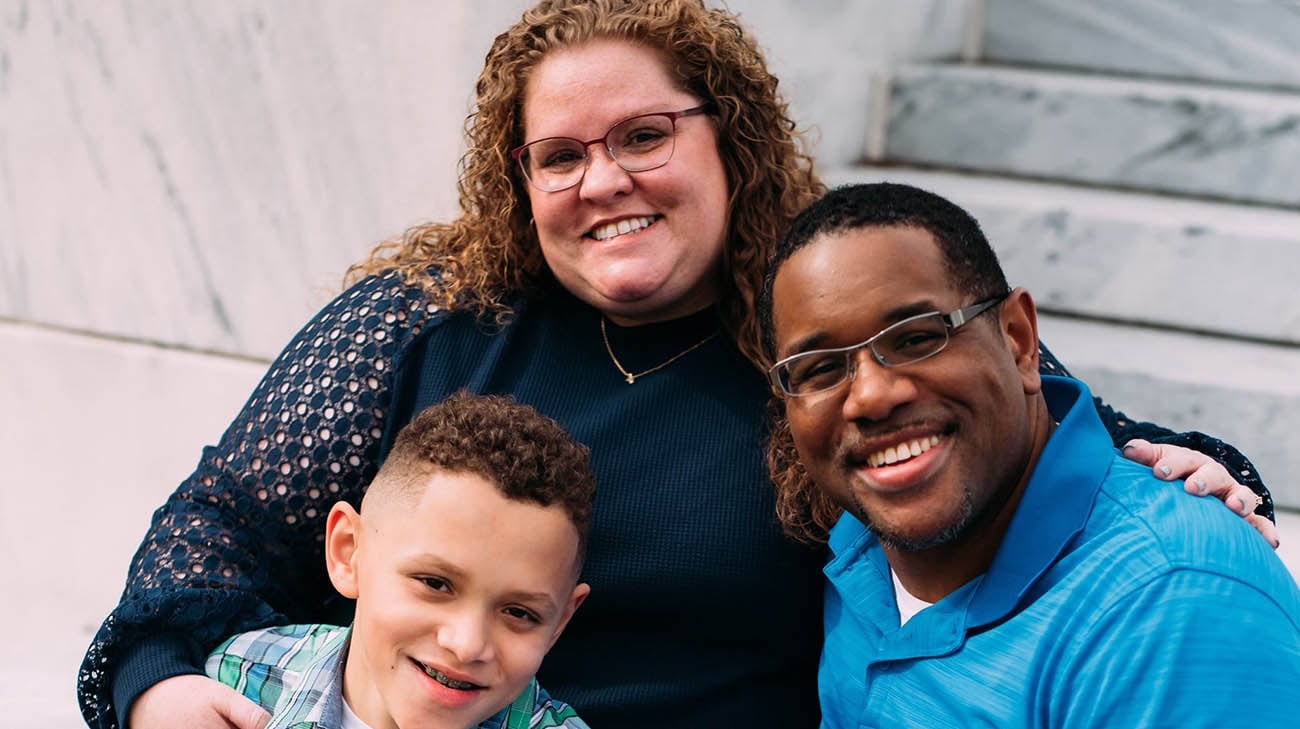 Quentin, Tera and Treye are grateful for the care they received and the relationships they've built during their NICU journey. (Courtesy: Tera Johnson)

As Jackie remembers, “Tera was crying because it had been almost two weeks since the birth and she hadn’t gotten to hold her baby yet. That night, I was on duty as Q’s nurse and he was very sick. It was looking like he was going to be intubated and put on a ventilator,” which would delay Tera’s ability to hold him even further.

Jackie, whose twins were a year old at the time and had spent a few days in the NICU after their birth, talked to her fellow nurses and physicians about allowing Tera to hold him. She reasoned the risk in doing so was very low, since he was likely to be intubated and put on a ventilator anyway.

So, with Tera seated in a chair, Jackie and a respiratory therapist navigated the bevy of tubes and wires and machines keeping Q alive, and carefully laid him on Tera’s chest – in a nuzzling embrace known as kangaroo care. The hope was to give Tera 10 or 15 minutes with Q. 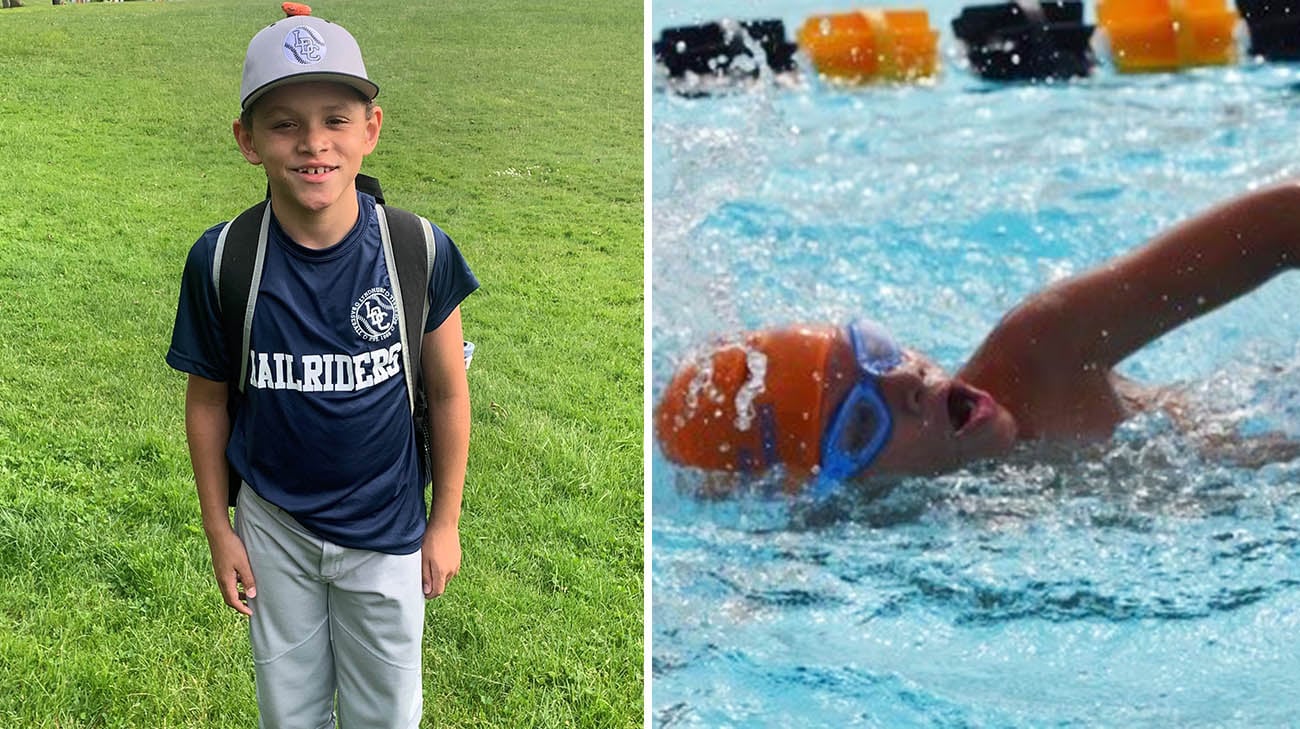 Quentin has made amazing progress over the past 10 years. He enjoys being active in basketball, baseball, soccer and swimming. (Courtesy: Tera Johnson)

She ended up being able to hold him for more than an hour, as Treye read a children’s book to them. “It was a life-changing experience. It really hit me, as a nurse, how we can make a difference in their lives.” Amazingly, Q never did need to be intubated. As Jackie describes it, “He just needed his mom.”

Says Tera, “At first, I was so scared to hold him. He was so tiny. He looked like a little chicken, all skin and bones. But I just held him on my chest, skin-to-skin. It was amazing.”

When Q finally was well enough to go home, the Johnsons maintained a relationship with Therese, Jackie and many of the fellow parents they met who comprise their “NICU family.” For several years, Tera and Treye would attend Family Support Group meetings, offering advice and encouragement to families just beginning their NICU journey. 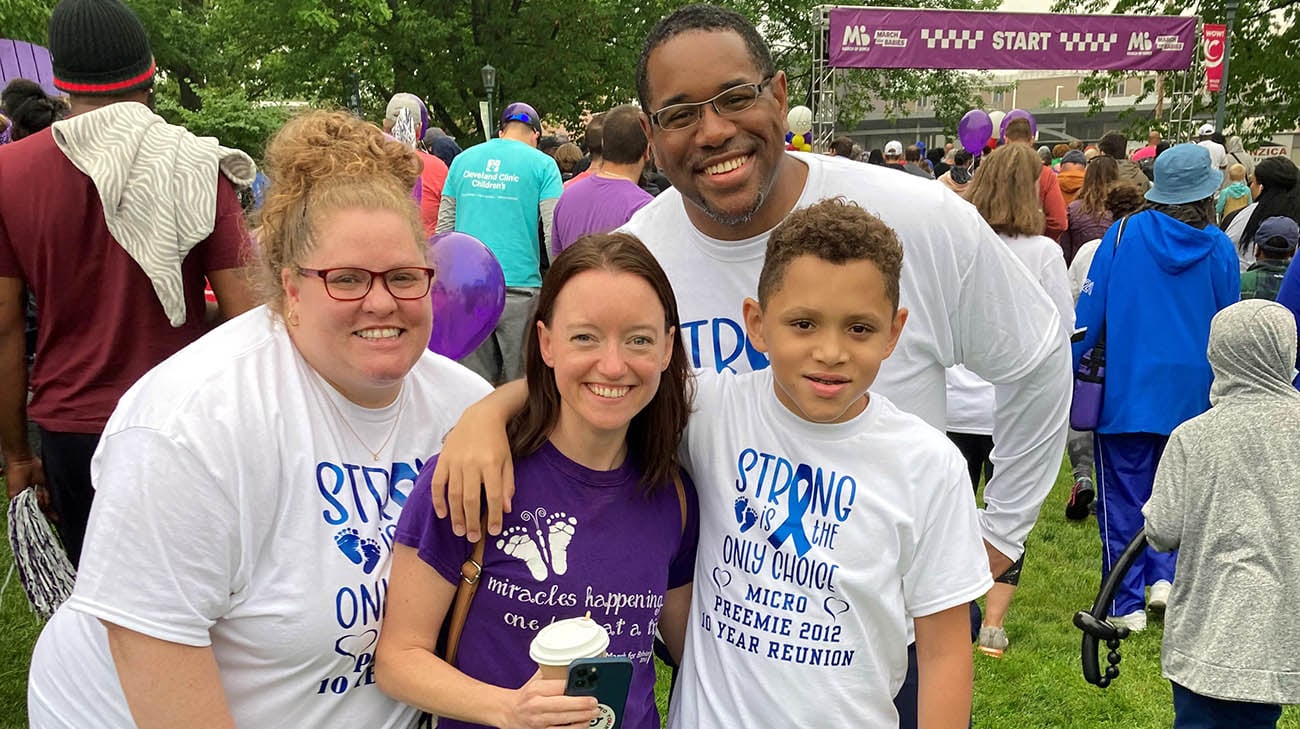 Quentin, Tera, Treye and Jackie at the 2022 March of Dimes walk in Cleveland. (Courtesy: Tera Johnson)

They enjoy keeping their friends up to date on Q’s progress. Now a robust fourth grader, who stands 5 feet tall, Q is an excellent student and athlete who enjoys basketball, baseball, soccer, swimming and diving. Recently, Tera brought Therese to tears after sharing a video of Q playing the saxophone in his school’s band.

“Knowing how tiny his lungs were, and how sick he was in the NICU, it’s just a miracle what these physicians and nurses did for Q,” notes Therese. “And what the parents did, too. We always say that parents are a big part of the baby’s care team in the NICU.”

Q has suffered few post-NICU complications, although he did require dual-ankle surgeries in 2019 to lengthen his Achilles tendons. Overall, he’s healthy, happy and thriving. His parents are grateful to the vast team of family, friends and medical staff responsible for saving his life and theirs.

“My advice for NICU parents is if your hospital has a family support group, absolutely go and connect with other families in your shoes. Build those relationships. Those are the only other people who are going to understand your journey.”