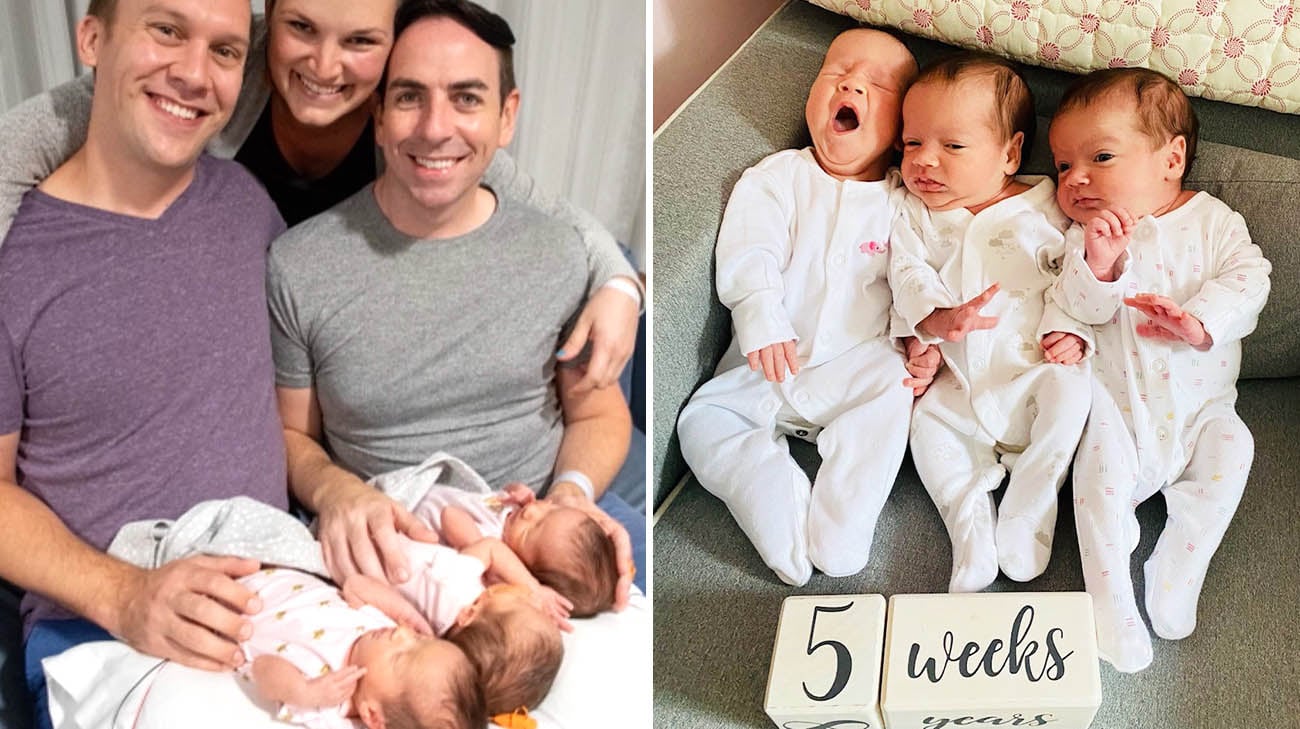 The year 2021 will be remembered as a whirlwind for Eric Portenga and his husband, Kevin O’Neill. Since their marriage in 2016, they’ve been thoroughly researching options for having children. However, having three – all at once – wasn’t necessarily in their plans. Eric and Kevin welcomed identical triplet daughters on September 9, 2021. Their surrogate, Maureen Farris of Akron, Ohio, gave birth to the girls at Cleveland Clinic Akron General.

“Just before we got on a video call with Maureen, to be there for the first ultrasound (at six weeks of pregnancy), Eric jokingly said, ‘Imagine it’s twins.’” recalls Kevin. “And I was like, ‘It's not, because the chances of being twins are less than 5%.’ And then, yep, identical twins.” 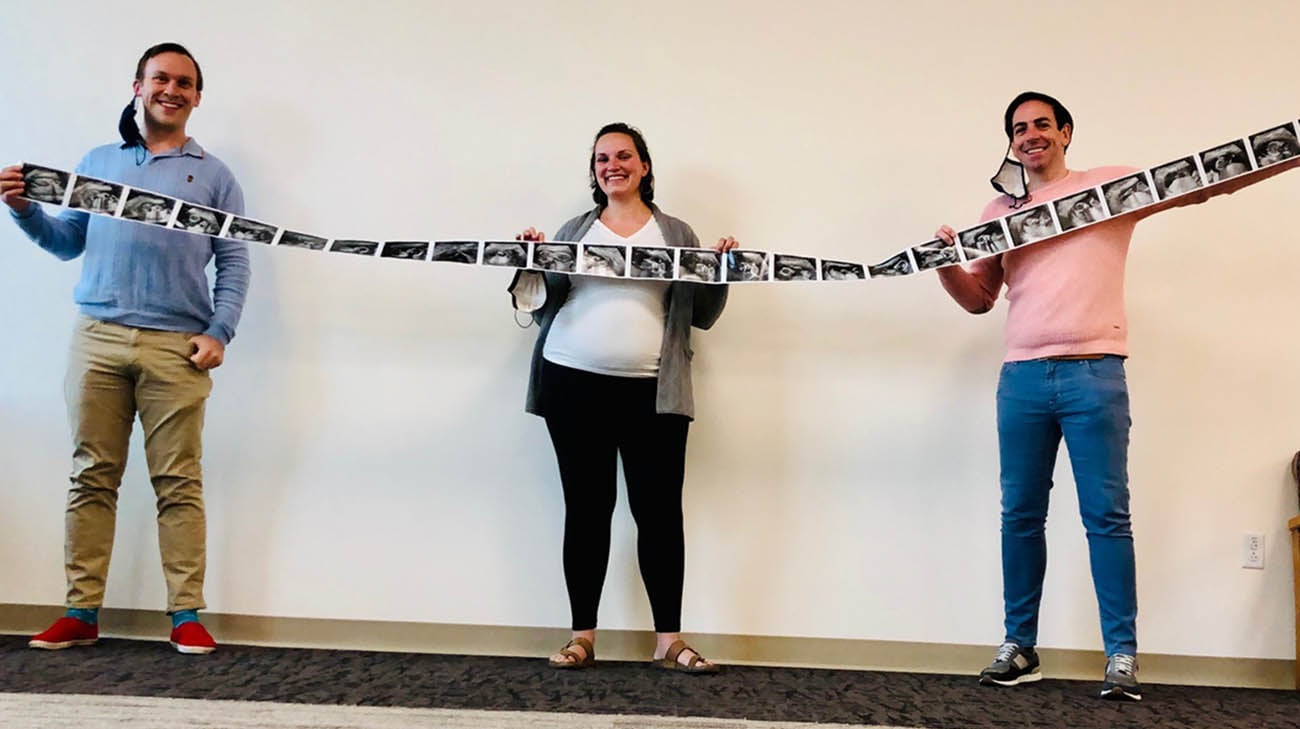 Six weeks later, during a subsequent sonogram followed by a visit to a reproductive endocrinologist, they found out their impending family of four was about to be five. “I remember saying, ‘Do we really have triplets?’” says Eric. “Do we have to get a new car?”

Yes, to both questions (they now own a minivan). And at 35 weeks gestation and via cesarean birth (C-section), sisters Parker, Robin and Sylvie made their grand entrance. Following an 18-day stay in the neonatal intensive care unit (NICU), the girls – and their nervous dads – made the long drive back to Ann Arbor and began their lives together.

Kevin and Eric met Maureen, a school teacher and mother of a 5-year-old son, Julian, through a mutual friend. While Maureen and her husband, Jeremiah Currier, had decided not to have any more children, she “loved being pregnant” and was privately considering becoming a surrogate for another couple. 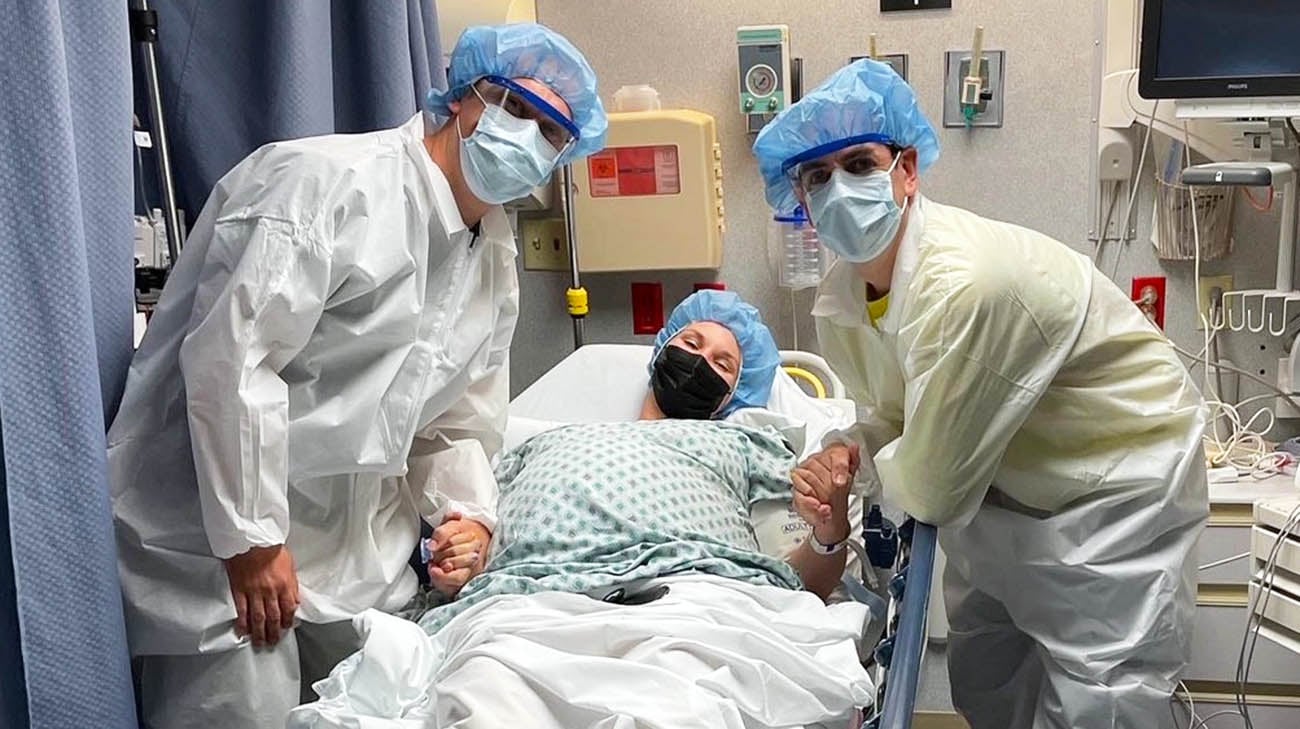 Maureen gave birth to the girls at Cleveland Clinic Akron General. Eric and Kevin were in the delivery room for the births. (Courtesy: Kevin O'Neill)

“Children are my heart and my passion,” says Maureen, who the triplets will know as Auntie Mo. “When I realized maybe I could help another family, I decided surrogacy was a route I'd be interested in taking.”

When she and Jeremiah first met Kevin and Eric, who drove to Akron for their initial meeting during the summer of 2020, “it was like a really good first date where you're just clicking. We were on the same page about everything that we talked about, (from) surrogacy and families to our interests, like travel. I knew in my heart it was something I was called to do.”

Before beginning the process, everyone agreed on some ground rules: the eggs would be harvested from a donor, fertilized by Kevin or Eric and implanted into Maureen by in vitro fertilization (IVF). While Maureen would not be the biological mother, and has no parenting rights, the couple insisted she be part of their family and have a presence in the girls’ lives.

“It was really important to me I maintain some sort of relationship with the family,” notes Maureen. “Kevin and Eric instantly agreed, 100%. They said, ‘You're stuck with us now!’” 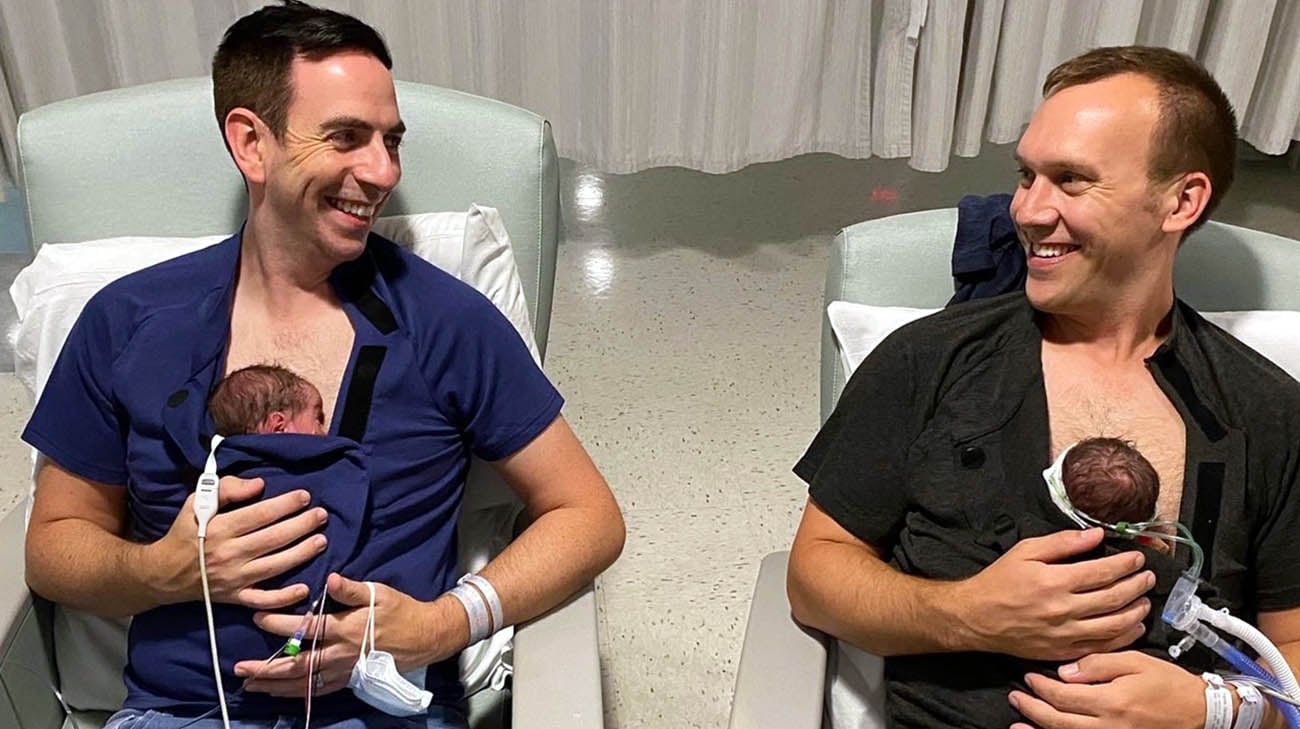 While IVF can sometimes require several attempts before a pregnancy occurs, Maureen became pregnant on the first try. Everything progressed normally until two heartbeats – and, later, three – were detected. It’s a rare event, there were approximately 3,100 triplet births in 2019, says Stephen Bacak, DO, a maternal fetal medicine specialist, who delivered the triplets.

Maureen, of course, was shocked there were three babies growing inside of her. “I remember just feeling really up for the adventure,” she recalls. “But physically, it was one of the most difficult things I’ve ever done. The swelling and the stretching and the aches and pains. I was never on bed rest, but I felt most of the time like bed was the only place I could really be comfortable.”

Her doctors hoped she would be able to hold out until week 34, still early compared to a full-term pregnancy, but long enough the babies would be less likely to have birth weight issues. At week 35, the Cleveland Clinic Akron General team – which began handling her care during the 21st week of pregnancy decided the time was right for the C-section. 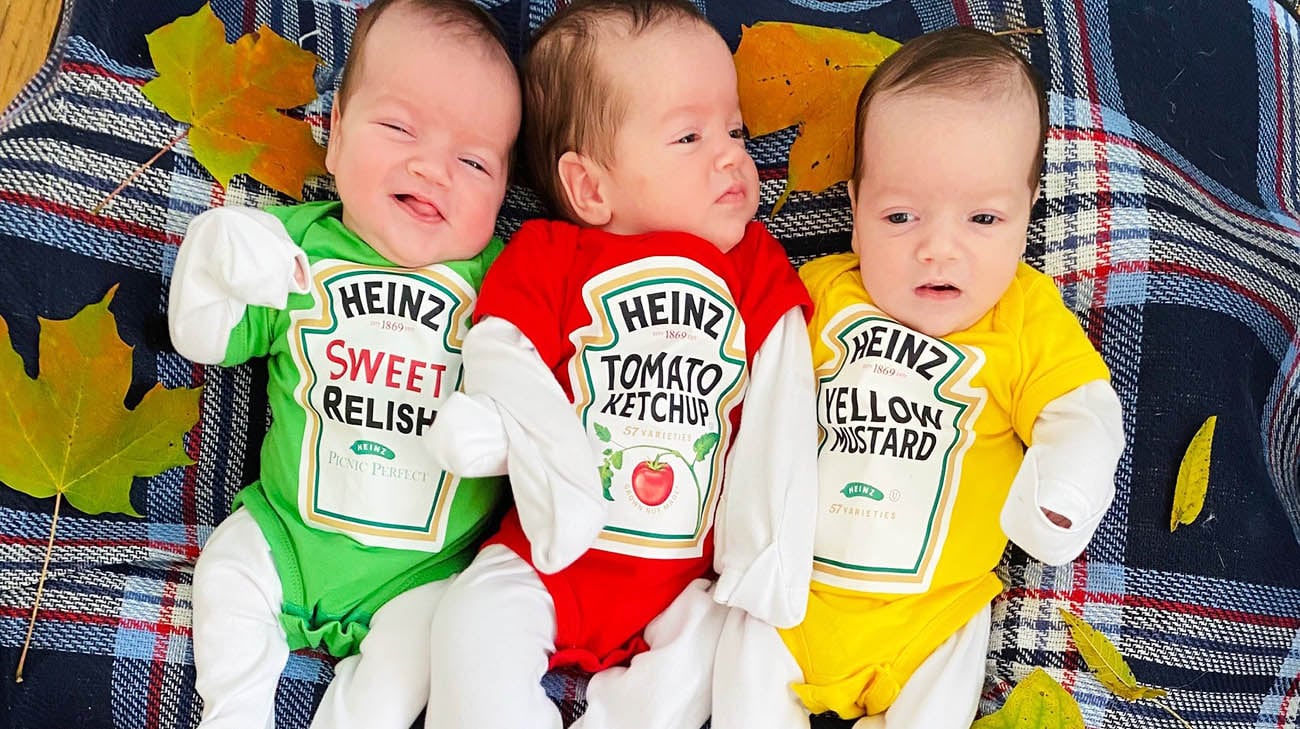 Eric and Kevin, were in the delivery room for the births. Recalls Eric, “Maureen is on the table, just chatting away to us. And she asked one of the doctors at one point, ‘Have you started yet?’ Then, it all happened so quickly and the girls all came out. And then there was just a blur of blue scrubs surrounding us. It was so fast-paced and well-organized.”

“The delivery had to be a very coordinated process,” explains Dr. Bacak. “We had a maternal fetal medicine delivery team as well as a large NICU team present with us in the delivery room. Everything went as well as can be expected with a multiple delivery birth.” 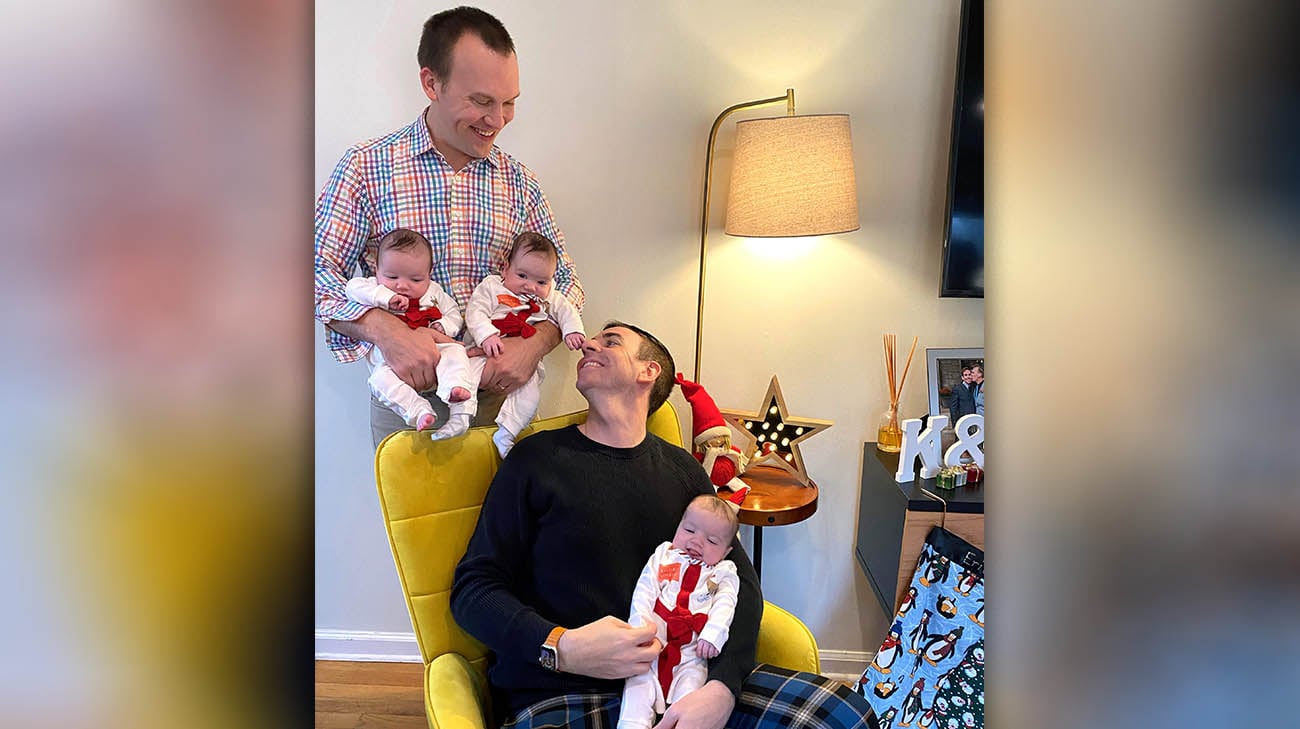 Kevin and Eric loved celebrating their first Christmas with their family of five. (Courtesy: Kevin O'Neill)

Dads for three months now, Eric and Kevin have settled into a daily routine. Parker, the oldest, reliably eats and sleeps on schedule. Kevin says Robin “is the fiery one” who is either calm or screaming. And Sylvie, the smallest, makes cute squeaky noises when she sleeps. Kevin jokes, “We're experts at diaper changing now.”

“We're trying to make sure we can tell them apart by behavior and personality,” states Eric. “That may become more difficult as they get older.” But, adds Kevin, each has been designated her own special color. Parker is purple, Robin is turquoise and Sylvie is yellow – to easily identify them.

As for Maureen, she is thrilled her surrogacy has forever brightened the lives of Kevin, Eric and their girls. “I feel like I helped my best friends have their babies,” she exudes. “I love the girls with all of my heart, and I'm just so grateful they have their daddies.”