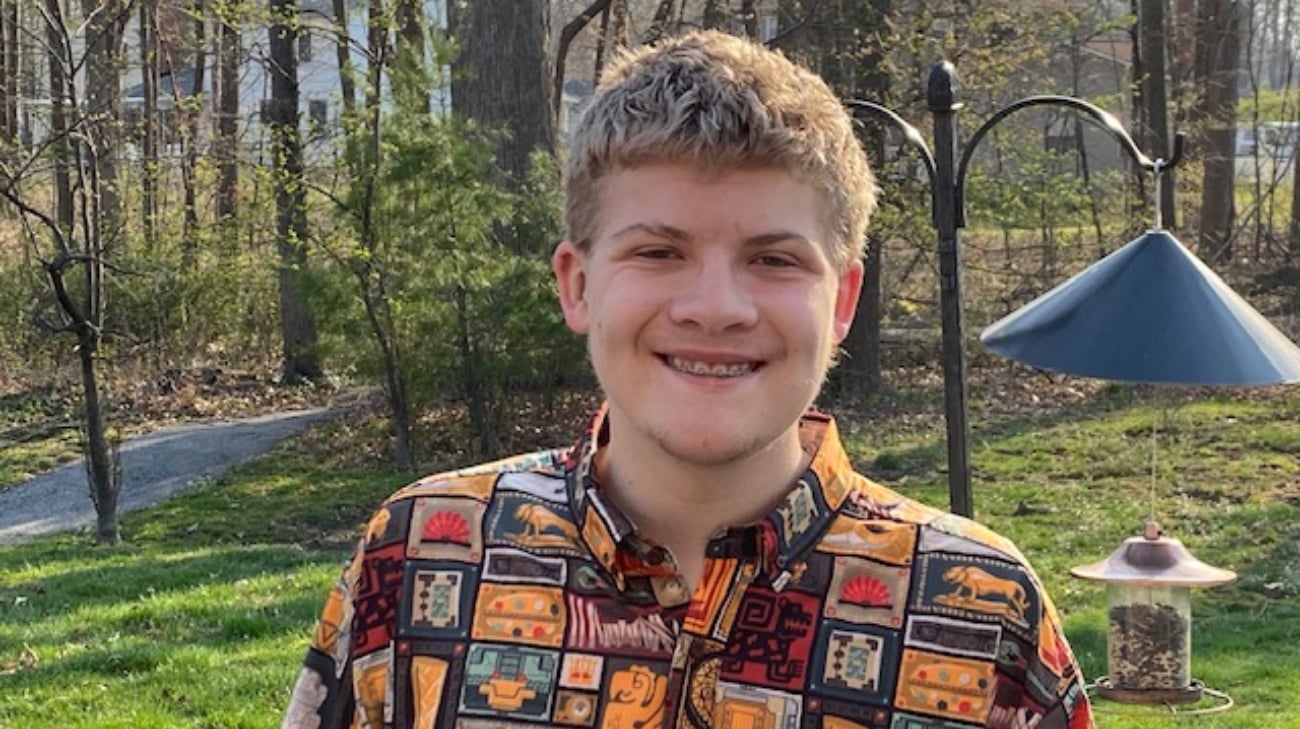 Jack Mazeika is your typical 19-year-old guy. He’s laid back and funny, he likes to go on bike rides, and he loves movies and the history of film. He’s working to figure out his life path while attending Lakeland Community College. But, mostly, he holes up in his room for hours playing video games.

The Mentor native was born with a mild form of autism and fetal valproate syndrome — a rare condition that is caused by exposure in the womb to valproic acid or sodium valproate (VPA) during the first three months of pregnancy. His mom, Katie, was prescribed medication containing VPA to treat her epileptic seizures.

Jack was also born with a jaw malocclusion — causing a very severe underbite. The jaw issue affected his speech and required speech therapy while in grade school. “No one outside of my family could understand me when I talked. I’d keep repeating myself and raise my voice hoping they could get what I was saying, but I think that made others think I was hostile. I was just frustrated and wanted to be understood,” says Jack. His mother Katie adds, “Jack would spell out words so others knew what he was saying. That actually made him one heck of a speller.”

In 2009, Jack and his mom scheduled an appointment with Cleveland Clinic’s Cleft and Craniofacial Anomalies Clinic. They spent part of the day meeting with various team members including Kenneth Lawrence, DDS, an orthodontist who would be the first step in his journey to correct his jaw problems. “It was a great way to meet with so many people who would be part of Jack’s surgery process,” says Katie.

“Dr. Bassiri saved my social life. A few months ago, people couldn’t understand me — and now my speech is so clear. I’m thinking about doing community theater because I really like being on stage,”

Shortly after, when Jack was seven years old, he started orthodontic care to lessen the underbite. “Dr. Lawrence told us Jack would ultimately need surgery to truly fix his jaw,” remembers Katie. Over the next 12 years, Jack would have multiple rounds of braces and headgear in preparation for jaw surgery.

In 2020, Jack’s teeth and jaws were ready for the next step.

That June, Jack had a one-on-one appointment with plastic surgeon Bahar Bassiri-Gharb, MD, PhD. “Jack’s upper jaw was so far behind his lower jaw that it caused him to have difficulties chewing and biting food, created speech issues, and gave him a severe facial deformity,” explains Dr. Bassiri-Gharb.

A maxillary advancement surgery (Le Fort I) and bilateral mandibular osteotomies were necessary to correct his occlusion and also address his facial balance. Dr. Bassiri-Gharb created a virtual surgical plan with three scenarios before the surgery. She also had three different jaw models created with 9, 12 and 14 millimeter maxillary advancements.

“My hope was that I’d be able to move his upper jaw forward 14 millimeters, but wanted to be prepared for different scenarios in case it wasn’t possible once I was in surgery,” explains Dr. Bassiri-Gharb.

Jack had his surgery in October 2020. Dr. Bassiri-Gharb was able to move his maxilla forward 14 millimeters and pushed his mandible back only 5 millimeters. She also grafted bone from his hip to his jaw to help with the healing process and added cheek implants to improve the look of his cheekbones. 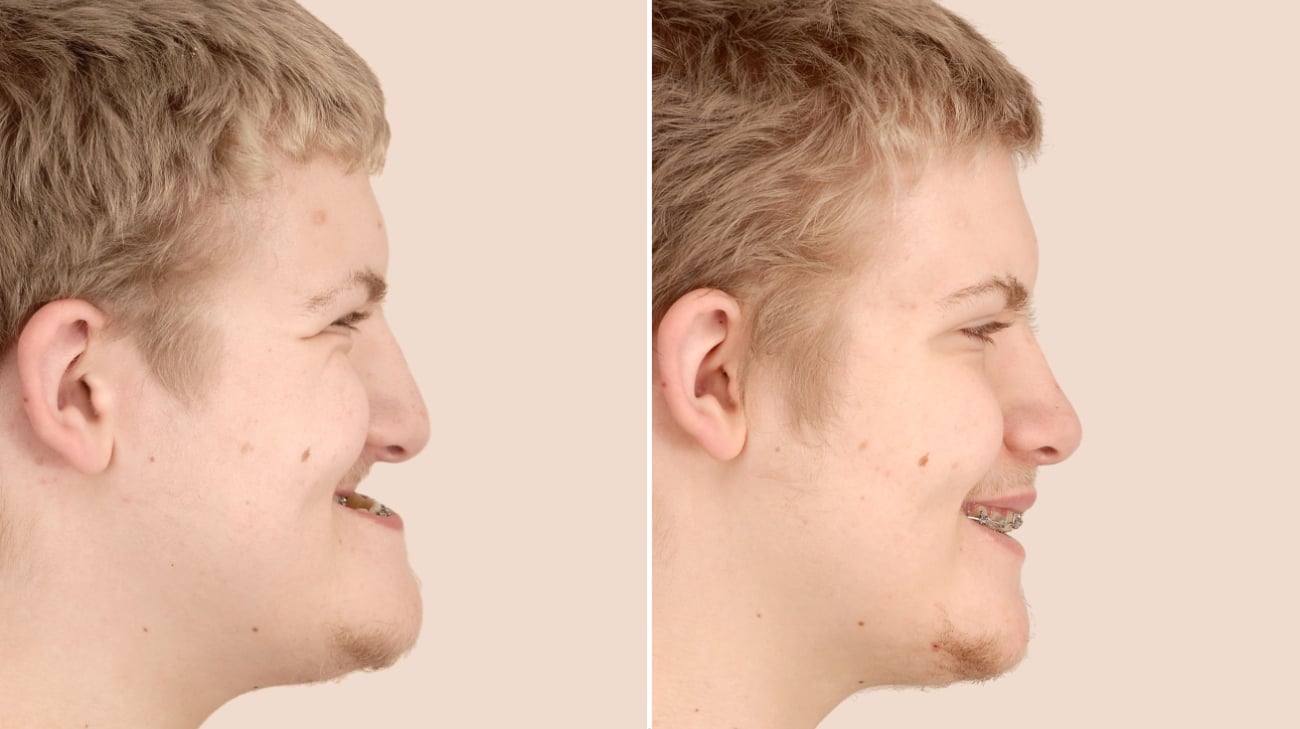 Before and after: Born with a severe underbite, Jack underwent surgery to reposition his upper and lower jaw bones and to add cheek implants. (Courtesy: Cleveland Clinic)

“Through surgery, I wanted to make Jack’s occlusion normal, improve his speech and breathing, and improve his outward appearance,” says Dr. Bassiri-Gharb. “I call him Brad Pitt now. The surgery results really show off his good looks.”

Not only did Jack’s outward appearance change, but his inside personality is able to shine.

Jack isn’t expected to need further medical care for his jaw. “At Cleveland Clinic, Jack had a whole team behind him to care for him and root for him all along the way. We were really lucky to be connected to Dr. Bassiri-Gharb,” says Katie. “Her work let Jack be more confident. There’s nothing holding him back now.” 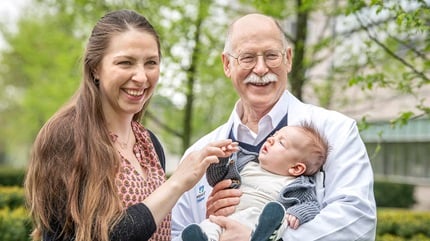