A dancer since age 3, Aubrey Cindia, now 15, has refined her skills over the years to a precise form of ballet called pointe. “I really liked how the dancers looked on stage, and I loved their pointe shoes,” recalls Aubrey, who is also an accomplished singer with dreams set on a performing arts career. “I really wanted to do that.”

Wearing aptly-named pointe shoes, Aubrey performs the classical dance form with the tips of her toes fully extended and pointing straight down, perpendicular to the floor. To excel at pointe requires more than technique and athleticism. The dancer’s body must also be in perfect, arrow-straight alignment, from the neck and down the back, through the hip, knee and ankle to the toes. 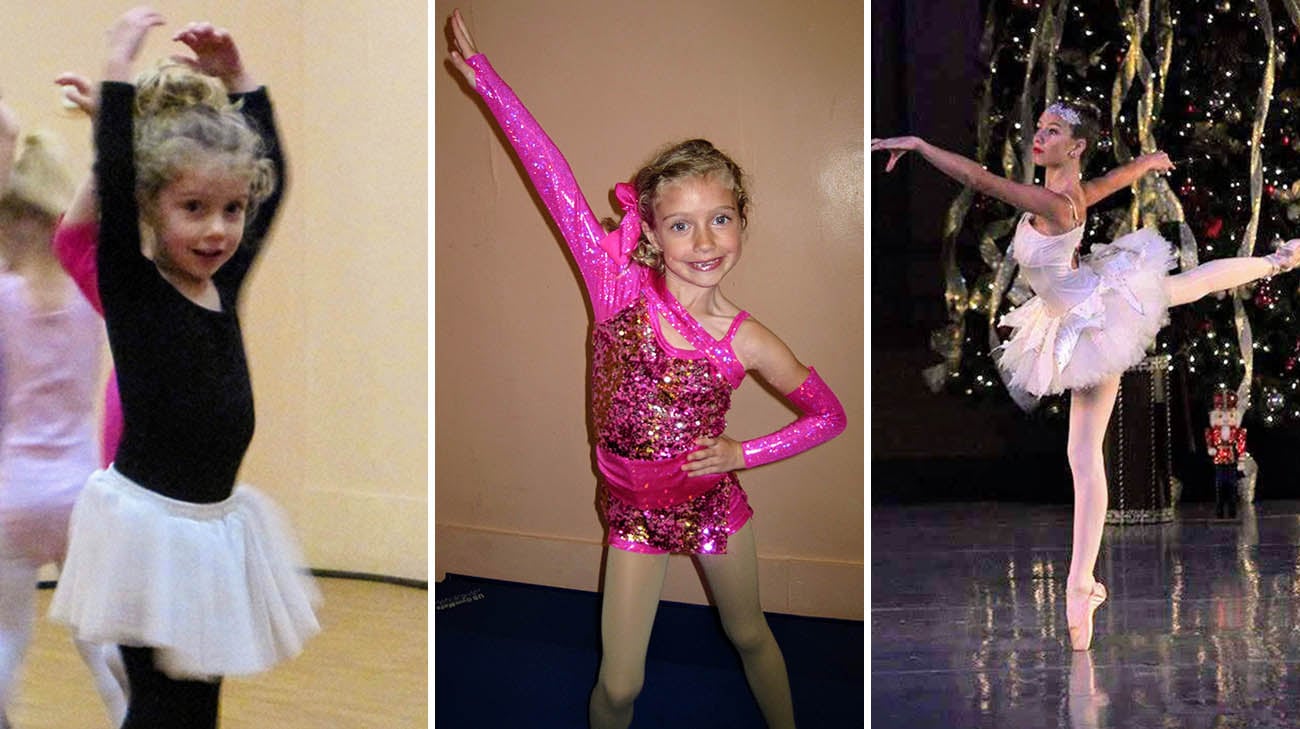 It’s not easy anytime, but it becomes nearly impossible to dance en pointe when you are afflicted with scoliosis, an abnormal sideways curvature of the spine that is 10 degrees – and often much more –off center. Usually occurring in adolescence, scoliosis is rarely painful or debilitating in milder forms. However, it can be devastating when you have the talent and drive to master pointe ballet.

Cleveland Clinic Children’s orthopaedic surgeon, Ryan Goodwin, MD, diagnosed Aubrey with scoliosis when she was 9 years old. Aubrey’s mom, Jamie Bolek, noticed the curved shape of her daughter’s back while Aubrey was wearing a bathing suit. She first experienced a moderate curvature of about 20 degrees. But over time, and as she grew, it worsened and began to affect her ability to do some of her favorite activities, such as running, tumbling, and of course, dance.

Despite wearing a corrective back brace several hours a day for four years, Aubrey’s scoliosis worsened from 22 to 28 degrees. Then, quite suddenly, as she went through a growth spurt in early 2020, her curvature increased to more than 40 degrees, a change her mother noticed while in California with Aubrey as she auditioned for a TV talent show. 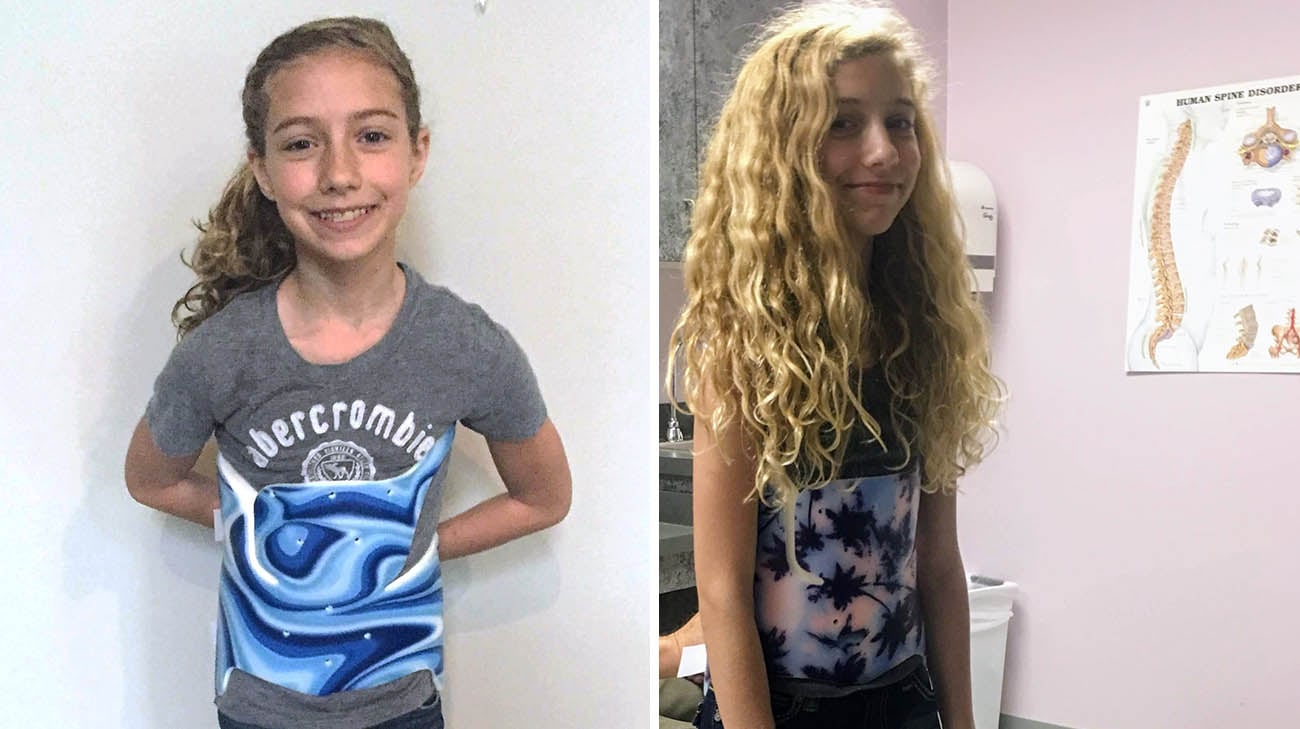 “Most people require spinal fusion surgery when (the curvature) gets worse,” notes Jamie, of the gold-standard treatment for severe scoliosis. “For many people, having a rod in your back doesn’t affect them because they don’t need a lot of movement, but fusion surgery would be devastating for Aubrey. It would end ballet for her. So she considered all her options.”

The one she chose was a surgical treatment for scoliosis called tethering. Fortunately, because Aubrey was still growing –albeit nearing the end of her adolescent growth phase –she was a candidate for the procedure. Unlike fusion, tethering involves the insertion of a strong, flexible, cord-like material onto the spine.

Vertebral body tethering uses a strong, flexible cord to pull on the outside of a scoliosis curve, thereby, straightening out the spine. (Courtesy: Cleveland Clinic)

“Despite the fact Aubrey was an exceptionally good brace wearer, her curve continued to get worse,” says Dr. Goodwin. “Since she still had growth remaining, so we could attempt to modulate the (curve) growth of her spine without fusing the bones together. This would allow her spine to straighten with growth.”

“When Dr. Goodwin mentioned surgery, it was a little scary,” recalls Aubrey. “But tethering sounded better than fusion. There was only a certain period of time that I can get this surgery, so I decided we might as well try it.” 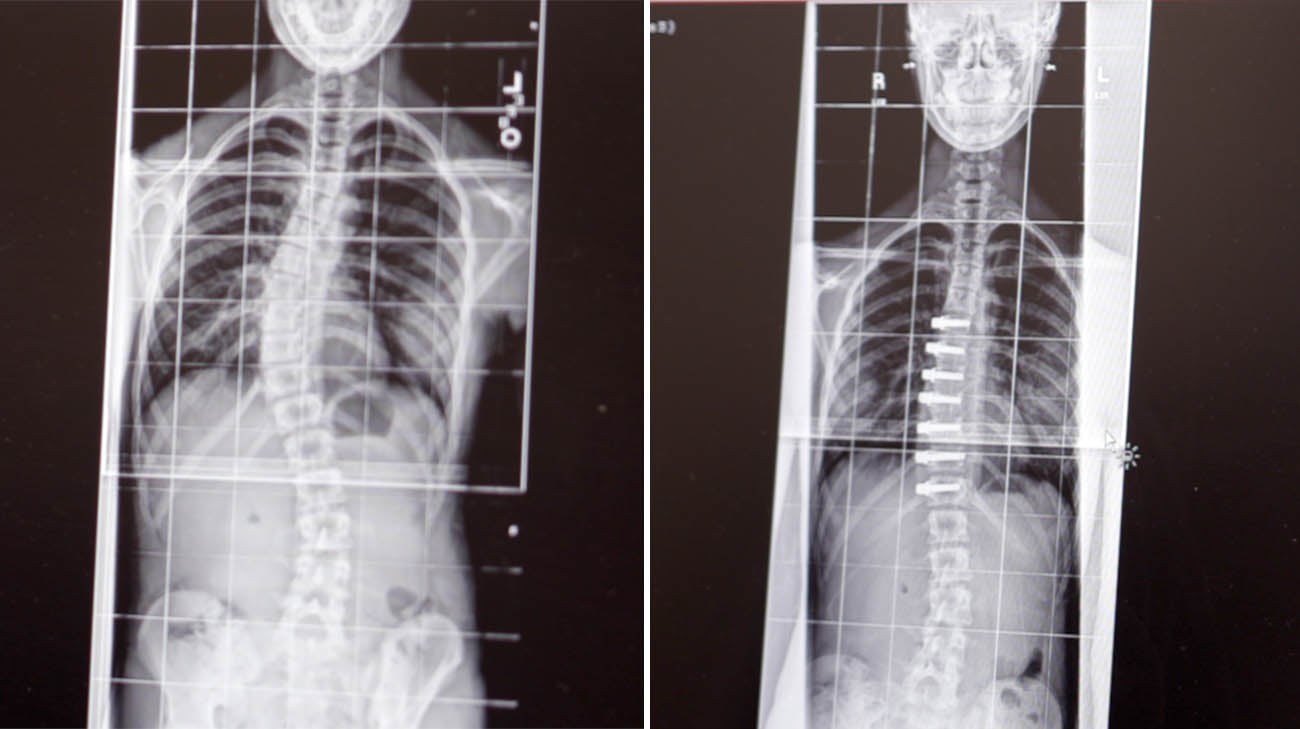 Aubrey was among the first patients at Cleveland Clinic to undergo the procedure in March 2020. With timing being critical, fortunately, her surgery was scheduled shortly before the hospital began cancelling many elective surgeries, as a result of the COVID-19 pandemic.

On the day of the operation, Aubrey chose her stepfather – Scott Bolek, despite suffering from amyotrophic lateral sclerosis or ALS – to accompany her back to the surgical prep area until she was anesthetized. “It was a special moment for Aubrey,” says Jamie. 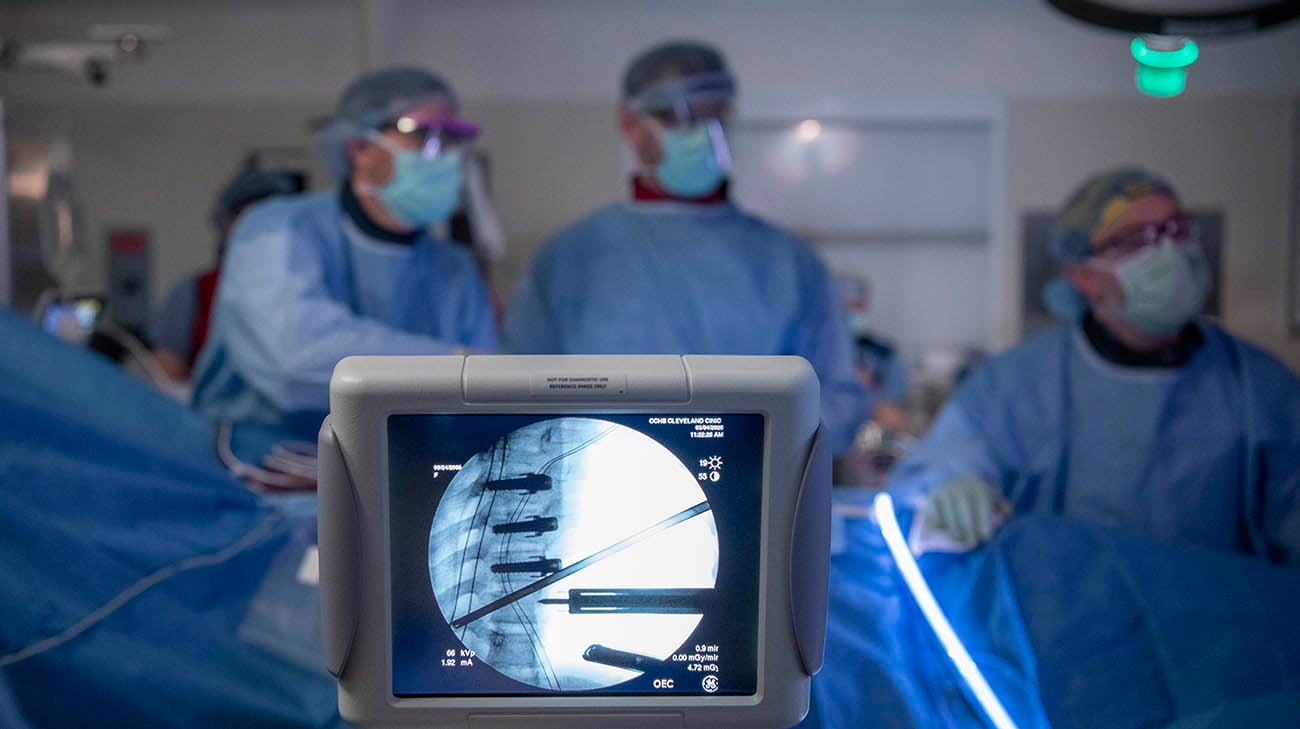 “Scott had been with Aubrey since she was 18 months old,” Jamie states. “They had such a special bond and Scott wanted her to (have the surgery) so she would be able to do everything she wanted for her future.” A little more than a month after, Scott passed away, at age 46.

“That was very special because I knew my mom wouldn't have been able to do it without making me cry,” says Aubrey. “He always just made everything seem calmer around me, which that means a lot.” 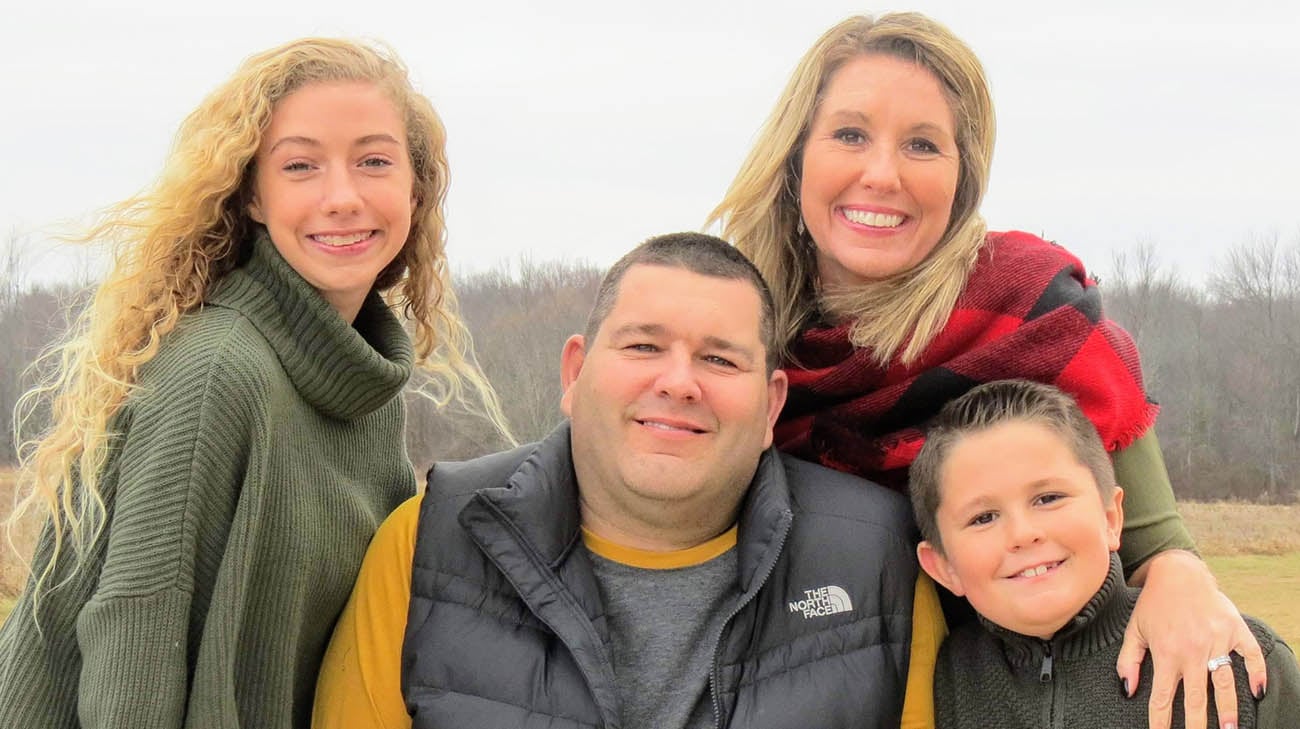 According to Dr. Goodwin, the four-hour operation required him to make several small incisions, through the chest wall, to insert screws and staples into her vertebra.

The tether – “like the strongest shoelace you’ve ever used” – holds the curved side of the spine in place and prevents it from bowing further while the other side of the spine grows. Pulling on the outside of a scoliosis curve, the spine slowly straightens as it keeps growing, while also preserving back motion.

“Only a very narrow subset of scoliosis patients are candidates for tethering,” he adds. “There has to be enough growth remaining and Aubrey probably only had a short window of a few months left for it to work.” 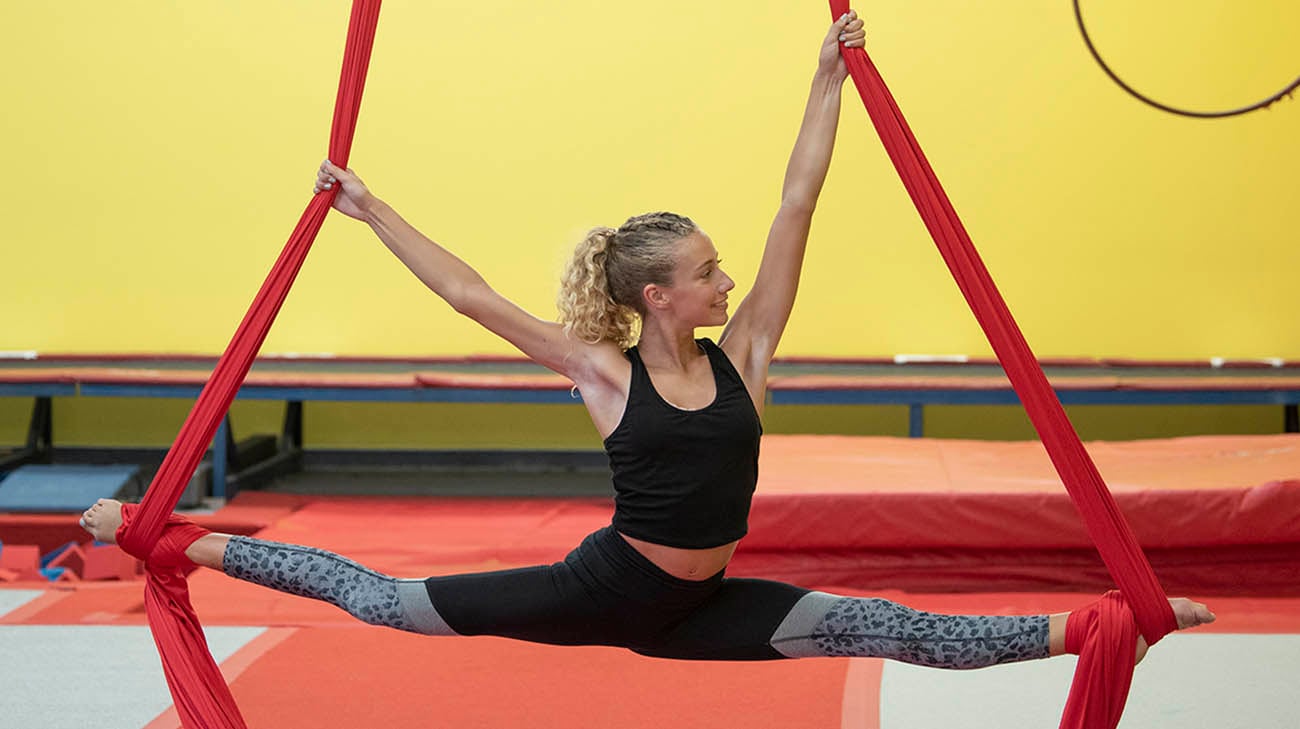 Tethering has opened up opportunities for Aubrey to pursue her dreams in performing arts. (Courtesy: Cleveland Clinic)

Building on the future Scott and Jamie have always supported, within a few weeks after surgery, Aubrey was exercising again by taking long walks with her mom. Soon after, she resumed dancing, gingerly at first. “I started practicing with my pointe shoes a little bit, and that’s when I noticed the (improvement).”

Jamie saw it, too, and is excited her daughter can resume her dream. “It’s way better than before. When she practices, she doesn’t have to overcompensate for the curvature anymore. And with her back straightened, it affects her lungs and we’re noticing she can sing with a stronger voice. We’re just so fortunate Aubrey had this option. Regardless of what she ends up doing, I’ll be proud no matter what.”