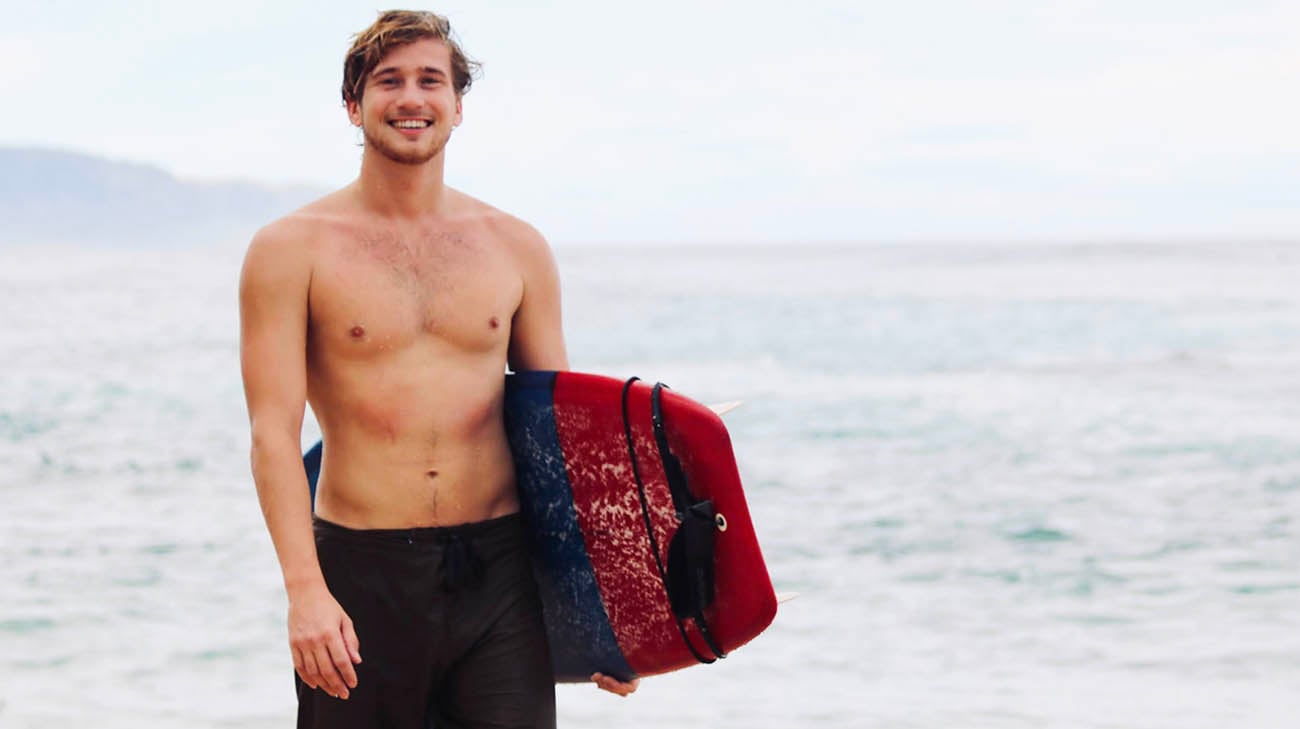 Slowly paddling out to sea, with his dad close by, 23-year-old Carter Parry was eager to resume the surfing life. Except this ride, in October 2020, was starkly different. The location was the Atlantic Ocean, off the coast of Massachusetts, and not at his adopted home of Kaneohe, Hawaii. He was on an 8-foot, easy-to-paddle, fish surfboard, rather than the shorter boards he regularly used on the massive waves, off Oahu’s North Shore. This expedition would last about 25 minutes, instead of the hours he would usually spend pounding the surf.

The Shaker Heights, Ohio, native knew that day was a transcendent moment in his months-long battle to recover from the early-January onset of influenza B, which was complicated by pneumonia.

“I’m making progress, that’s for sure,” says Carter, who is dividing time between his parent’s homes in Akron and Cleveland, Ohio, while continuing physical rehabilitation. “I know a lot of times people don’t survive what I had.” 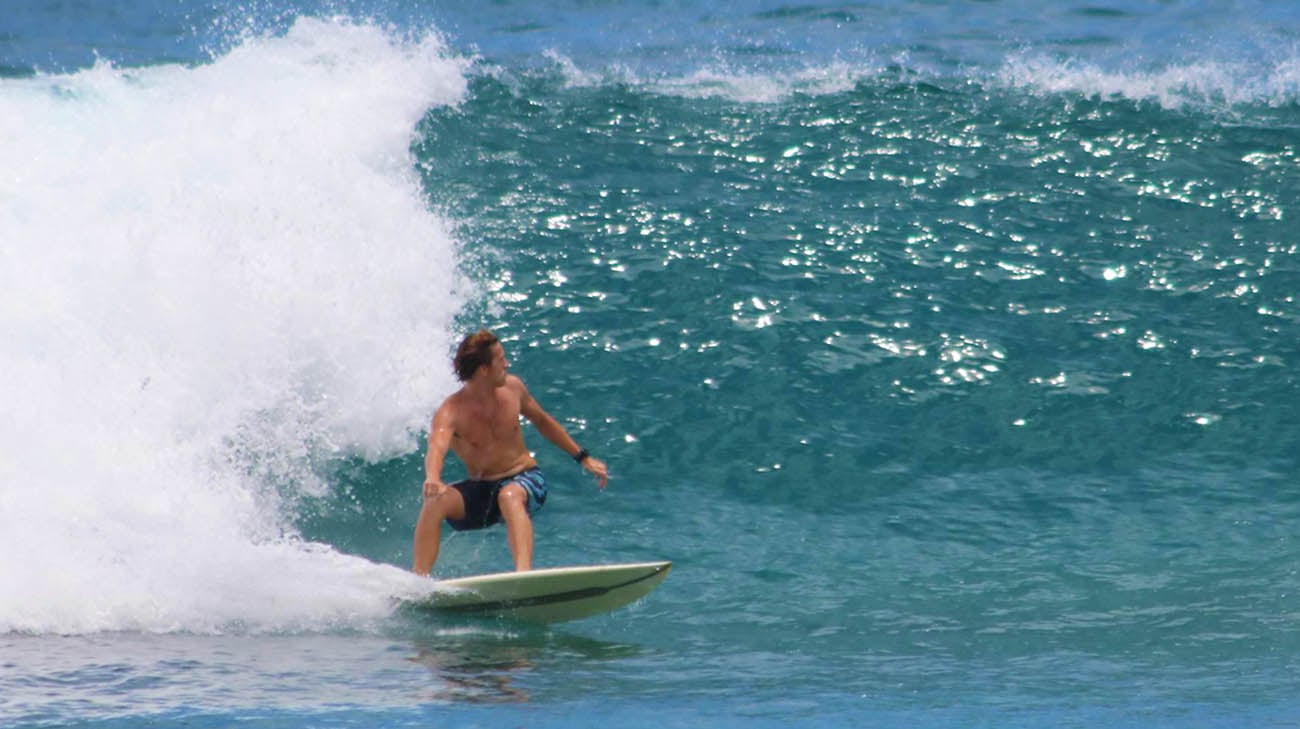 Carter surfing at Ala Moana, in Honolulu, Hawaii, in 2019. (Courtesy: Carter Parry)

The combination of flu and pneumonia left Carter’s body vulnerable to a “super infection” of methicillin-susceptible staphylococcus aureus (MSSA). It eventually required removal of his right lung, and not long after, a below-the-knee amputation of his right leg and plastic surgery to reconstruct his left foot.

“We’re completely in awe of Carter’s resiliency and determination,” says thoracic surgeon Alejandro Bribriesco, MD, part of a large team of Cleveland Clinic physicians, nurses and therapists who treated Carter when he arrived from Honolulu, about a month after he became ill. “Here, we see a lot of ‘unicorn’ cases that nobody else sees, but there really are not many patients quite like Carter.”

Carter’s dad, Bob Parry adds, “Carter looks at life as a ‘glass half full’ person. And now, he’s just so driven to get back to a normal life.” Bob is a pediatric surgeon at another local hospital who was instrumental in getting his son transferred to Cleveland Clinic. 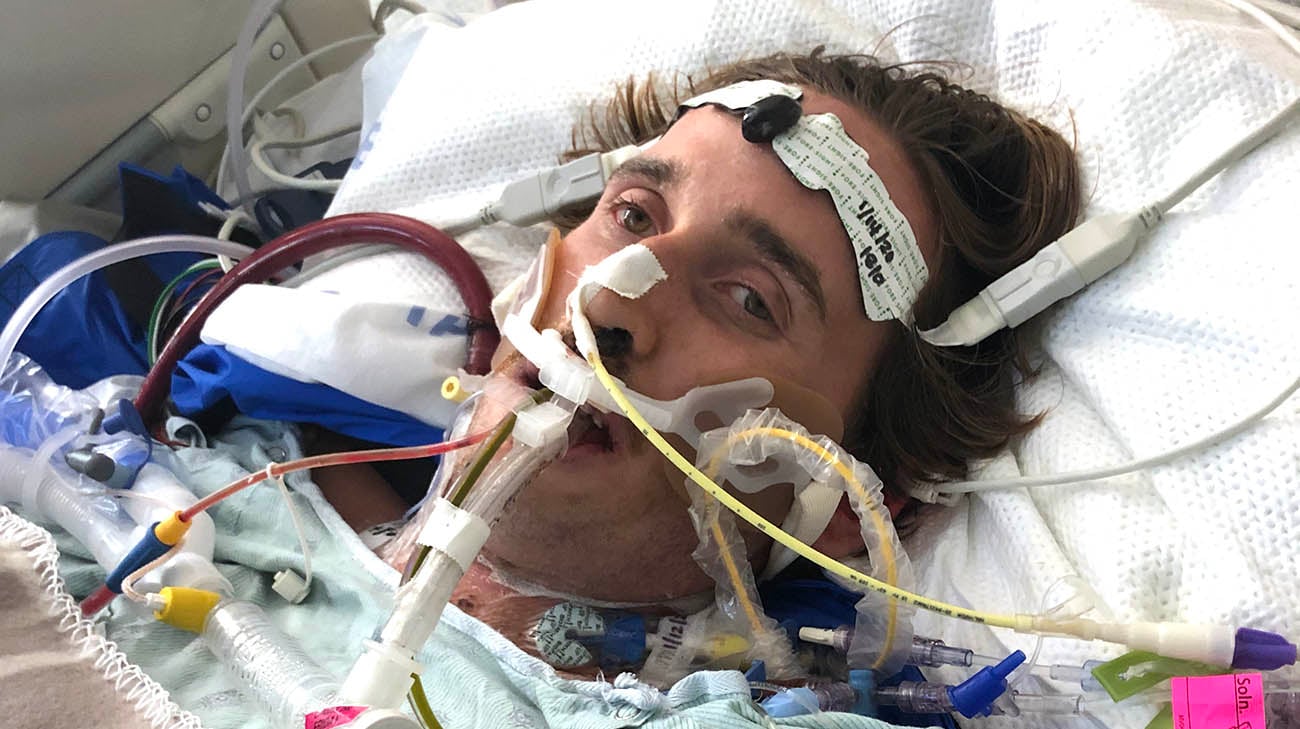 After Carter contracted the flu and pneumonia, it left his body vulnerable to developing a life-threatening infection called MSSA. (Courtesy: Carter Parry)

Carter’s sudden descent from a healthy and active young man to the brink of death took just a few days. Soon after returning to Hawaii in late December 2019, after spending the holidays with his family in Ohio, Carter felt minor cold-like symptoms, including a headache and scratchy throat.

He attributed the scratchy throat to smoke from New Year’s Eve fireworks near the east Oahu home he shares with lifelong friend Chase Putney. However, at the beginning of January, he felt more flu-like symptoms, such as body aches and trouble sleeping. “Nothing extremely alarming,” Carter recalls, “but I called my dad.”

Bob, who was just getting onto a boat in Fort Lauderdale, for a cruise to Mexico, advised bed rest and ibuprofen. A day later, while he was halfway across the Caribbean Sea, Bob, as well as Carter’s mother Kim, who was in Cleveland, got a text from Chase informing them Carter was hospitalized and in poor condition. 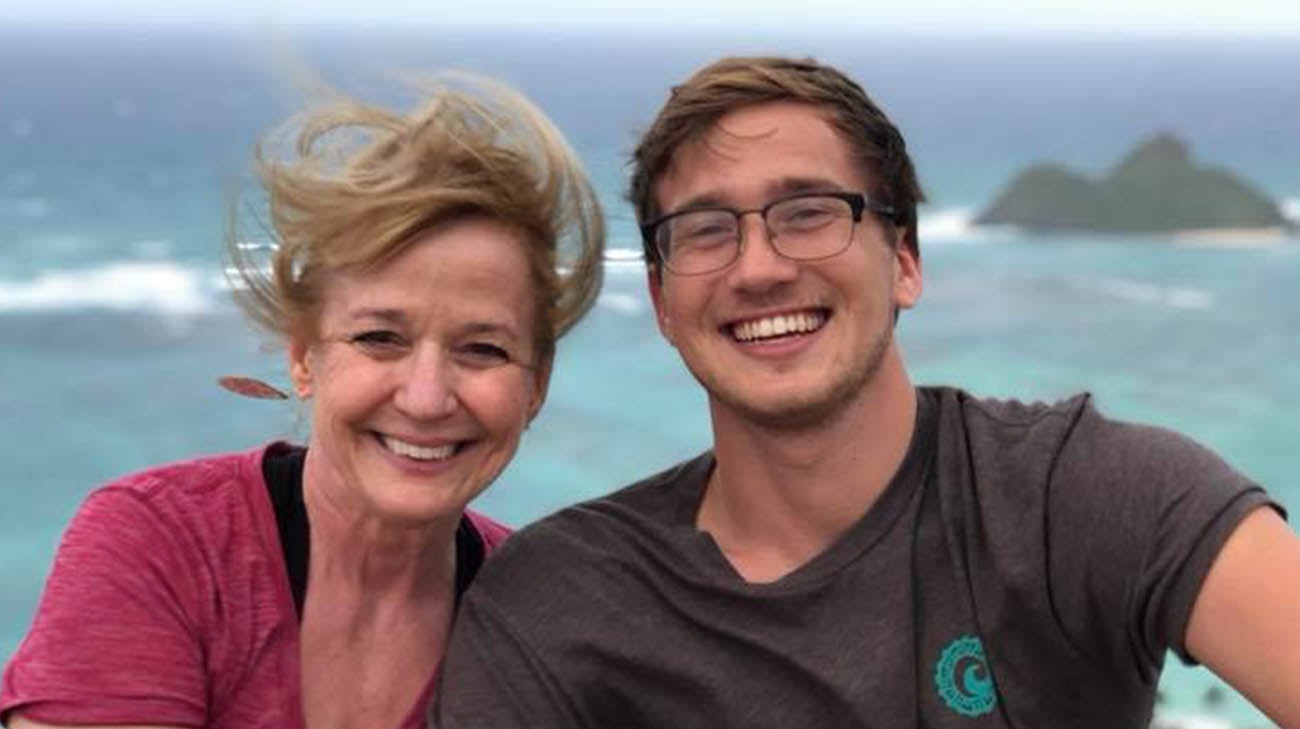 Kim immediately booked the first available flight out of Cleveland to Hawaii. She arrived at Carter’s bedside 20 hours later and was greeted with an embrace from his surgeon, saying they were doing everything possible.

“That hug told me how dire things were. I sensed on the plane Carter was dying, and the surgeon’s response confirmed that. I was trying to prepare myself, but somehow I also felt Carter would somehow survive.”

Bob, rushed off the ship when it docked on the island of Cozumel, took a ferry to Cancun, a flight to Seattle and then the first flight out to Honolulu. Two days later, he was finally at his son’s bedside and alarmed by what he saw. “When I walked into his (hospital) room, it was clear he was seriously in trouble. It didn’t take me long to process the fact that Carter was dying.” 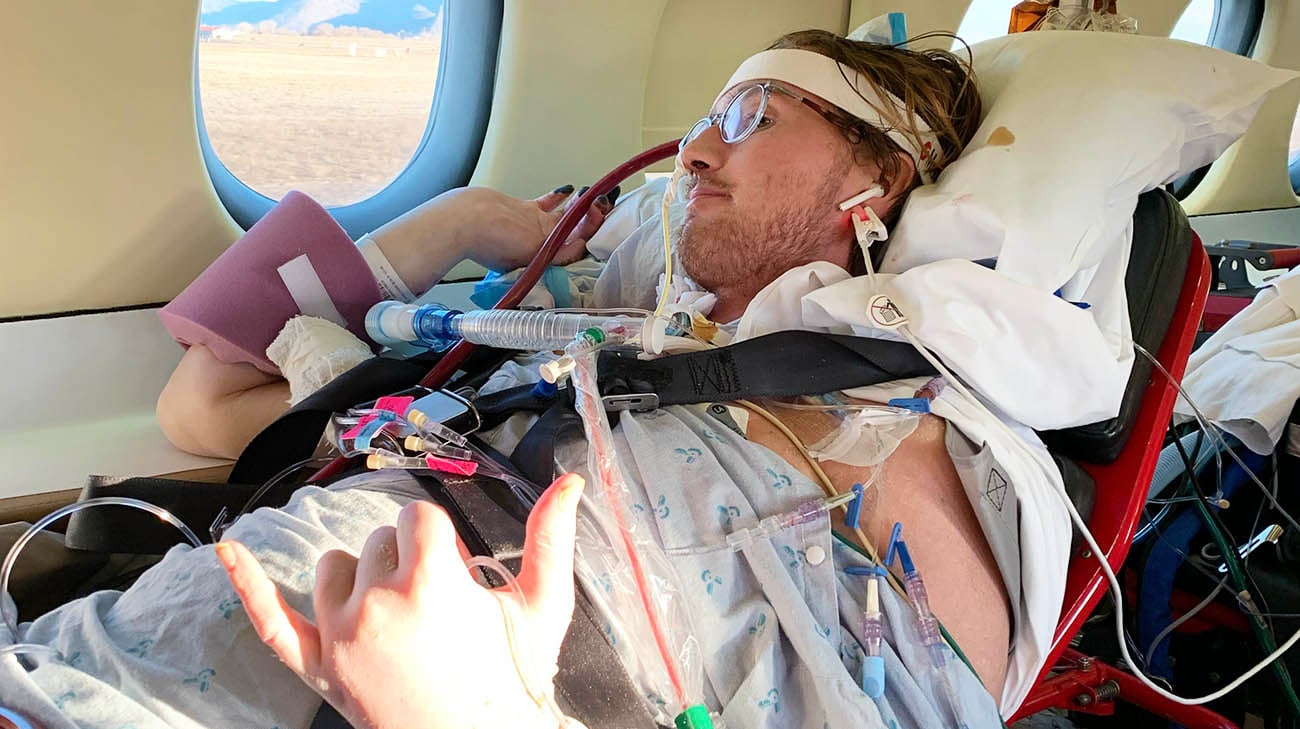 First treated at a community hospital in Kaneohe, with blood pressure-raising vasopressors and other medications, Carter was soon moved to a hospital in Honolulu, the only one in Hawaii equipped to provide extracorporeal membrane oxygenation (ECMO) to adults. ECMO is a temporary mechanical device that supports the heart and lungs.

As Bob explains,“The doctors did a great job in using ECMO to save his life. But his lung was so destroyed, I knew there were only a few places in the world where he’d have a chance to survive.” 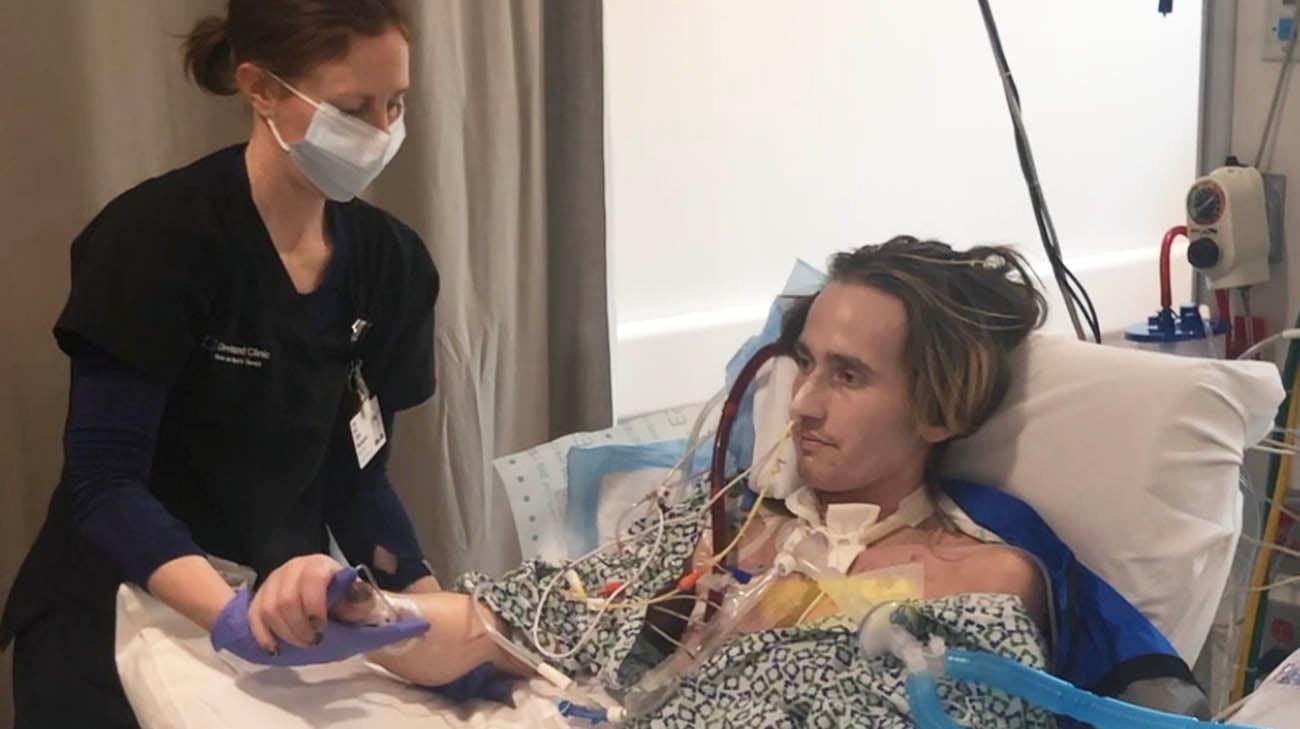 Carter has gone through extensive therapy throughout his treatment. (February 2020) (Courtesy: Carter Parry)

“Working together, we came up with a plan – it was kind of a Hail Mary,” Dr. Bribriesco recalls. “We’ve seen cases like Carter’s, but there’s no simple way to treat this. It’s unusual for someone his age to have this type of response to a virus, but it was Carter’s youth and remarkable will that helped him make it through.”

The raging infection completely destroyed Carter’s right lung, spreading inside the right chest cavity. To control the infection from the right lung and protect the left lung, one of the first steps was to surgically remove the right lung by pneumonectomy, which Dr. Bribriesco performed. At the same time, to prevent the contaminated right chest space from becoming an abscess, surgeons also performed an open-window thoracostomy (also called a Clagett window), in which portions of Carter’s ribs were removed and the hole around his chest skin was sewn to the inner lining of the chest wall.

“That created an open cavity we packed with gauze, soaked in a strongly medicated solution, to try and kill the remaining infection,” he adds. 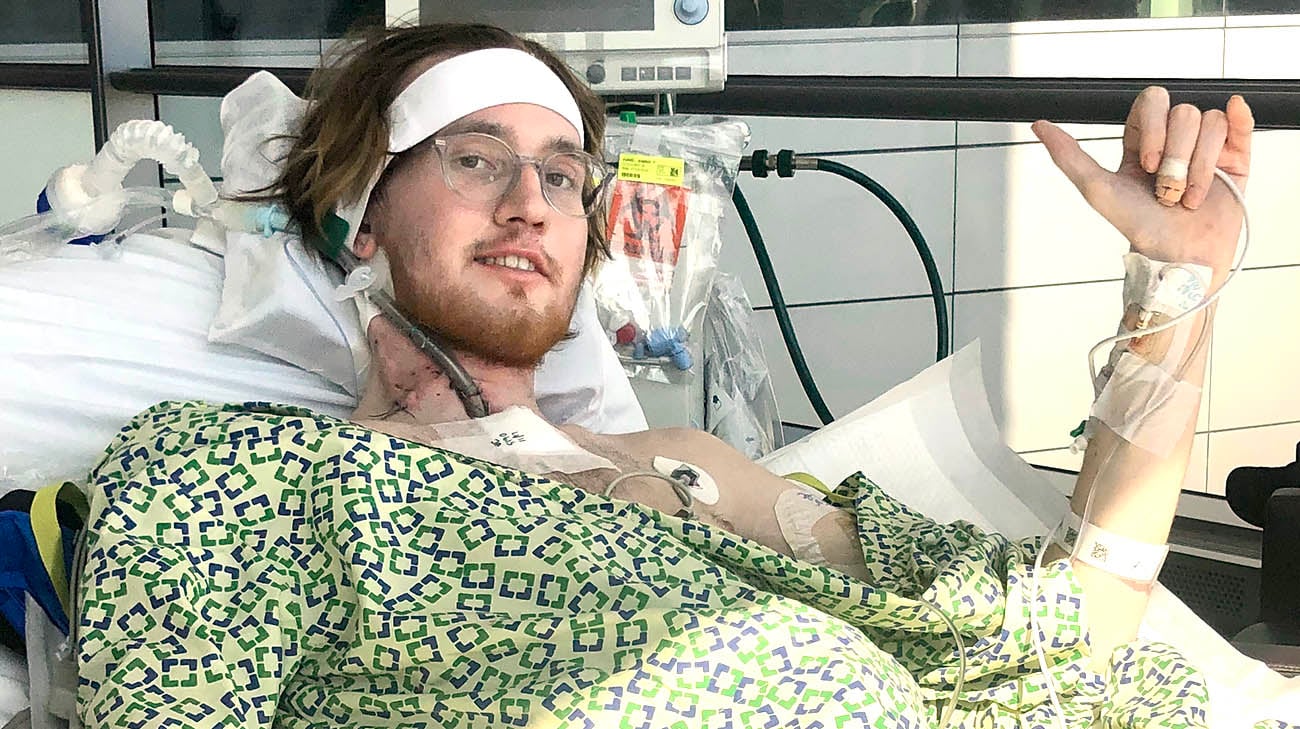 Caregivers who have met Carter throughout his medical journey have talked about his positive attitude, resiliency and determination. (Courtesy: Carter Parry)

Meanwhile, there were other worries. Because Carter required ECMO and vasopressors for so long to keep him alive, side effects developed – including a decrease in blood flow to his extremities, causing dry gangrene in his feet and finger tips. The gangrene in his right foot progressed from dry to wet, necessitating an emergent guillotine amputation of his right foot. Later, when the infection cleared, surgeons performed a more precise amputation, slightly below his right knee.

“Of course, I’m not super stoked to have had an amputation done,” notes Carter. “But I just look to the positive. You can surf with a prosthetic leg!”

While dry gangrene in his fingers improved, Carter ultimately lost the toes on his left foot. Once weaned off ECMO and a breathing ventilator, he was healthy enough to be transferred out of intensive care in late April. He was discharged from Cleveland Clinic early in May and underwent about six weeks of inpatient rehabilitation where he was fitted for his leg prosthesis.

In early July, one week after being discharged from rehab and just as his medical condition seemed to be taking a positive turn, Carter contracted COVID-19 soon after vacationing with family and friends. 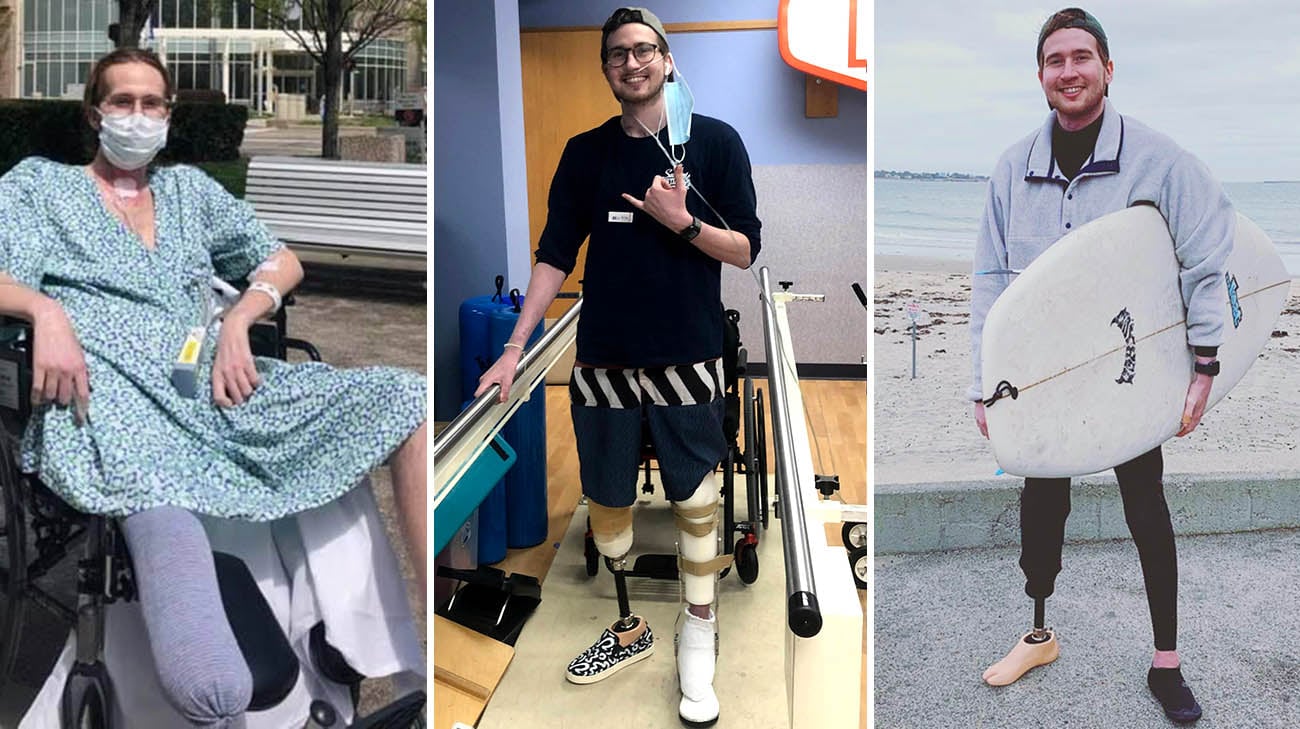 After being discharged from Cleveland Clinic in early May 2020, Carter underwent rehabilitation at another local hospital where he was fitted for his prosthetic. (Courtesy: Carter Parry)

Bob and Kim were devastated. “It was another incredible sequence of bad luck,” says Bob, who notes the group had taken numerous precautions to keep the virus at bay.

Fortunately, Carter experienced mild symptoms from COVID-19. “He barely turned a hair,” says Bob. “It was just a bump in the road, really.”

One of his Cleveland Clinic doctors, pulmonologist Mani Latifi, MD, was alarmed when he heard the news. “With one lung and not yet completely recovered, it was a difficult situation,” he says. “But Carter was able to handle COVID. Despite these challenges, it was never ‘doom and gloom’ with him. He’s got an attitude like nobody I’ve ever met.” 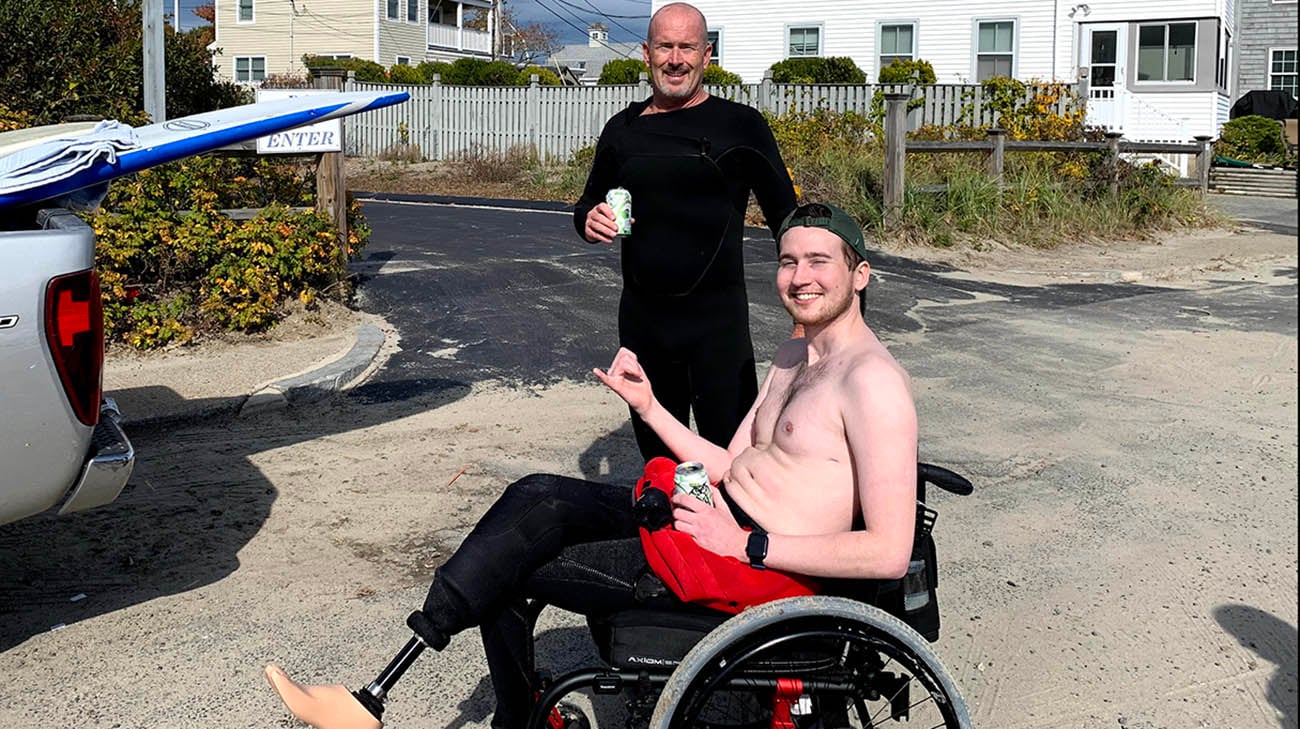 Carter relearning how to surf with his dad, off the coast of Massachusetts, in October 2020. (Courtesy: Carter Parry)

As Carter slowly regains his strength and dexterity, and learns to use various leg prostheses, he has a goal of returning home to Oahu sometime in early 2021. He wants to return to work at a Marine base, where he is an information technology specialist contractor.

A longer-range goal is to relearn how to surf using a prosthetic leg. “I hear they’re planning on bringing surfing to the Paralympics in 2024. So that’s the big goal for me,” he says. “I’m a young guy that got amputated early in life. So it’s in my court to make it happen.”