Losing control of his stand-on lawnmower as its wheels slipped on a muddy hillside, Luke Brittain jumped off the whirring machine, tumbling down six feet into a ditch on the Kent State University Stark campus. Seeing he was about to land atop the upside-down mower’s still-spinning blades, Luke instinctively reached up with his dominant left hand to shield his face just before impact.

“I rolled off the mower as fast as I could. I didn't think I had hurt myself,” recalls Luke, a lifelong athlete and accomplished baseball pitcher. “I tried to reach down in my pocket for my phone and that's when I realized my hand wasn't there.”

Wrapping the remnants of his shredded jacket around his arm and hand, Luke calmly waited for an ambulance to rush him to Cleveland Clinic Akron General. “My hand was a bloody mess. I didn’t even know if I had any fingers left,” Luke explains. “It was bad. I didn't think there was any way of getting my hand back at all.” Luckily, William Lanzinger, MD, felt otherwise.

An accomplished hand surgeon, he was having lunch with his family when Cleveland Clinic Akron General emergency department doctors informed him of Luke’s accident and severed hand. When he arrived at the hospital minutes later, and quickly assessed the situation, Dr. Lanzinger told Luke he would try his best to reattach the hand and restore its functionality.

“Certainly, we couldn’t guarantee that his hand could be saved,” says Dr. Lanzinger. “But I wanted to assure him that we’d do everything we can. That's what I wanted him to remember – to at least have some peace before going under anesthesia.” Dr. William Lanzinger and the clinical team only had a 6-12 hour window to re-establish blood floor to Luke's hand. (Courtesy: Luke Brittain)

Fourteen hours later, working painstakingly throughout the night – finger by finger, one knuckle and tendon and artery at a time – Dr. Lanzinger, fellow orthopaedic surgeon Andrew Esterle, MD, and a rotating team of a dozen other physicians, nurses and anesthesiologists succeeded in getting Luke’s hand reattached.

According to Dr. Lanzinger, Luke incurred injuries to every part of his hand, fingers and thumb. “One of the hardest parts of the surgery was putting the bones back together. He had multiple fractures and dislocations. I’m not sure I’ve ever (performed surgery) on injuries so extensive.” Ultimately, the team inserted a pin in every one of Luke’s fingers and joints. Then, as Dr. Lanzinger described it for Luke, the real work would begin. 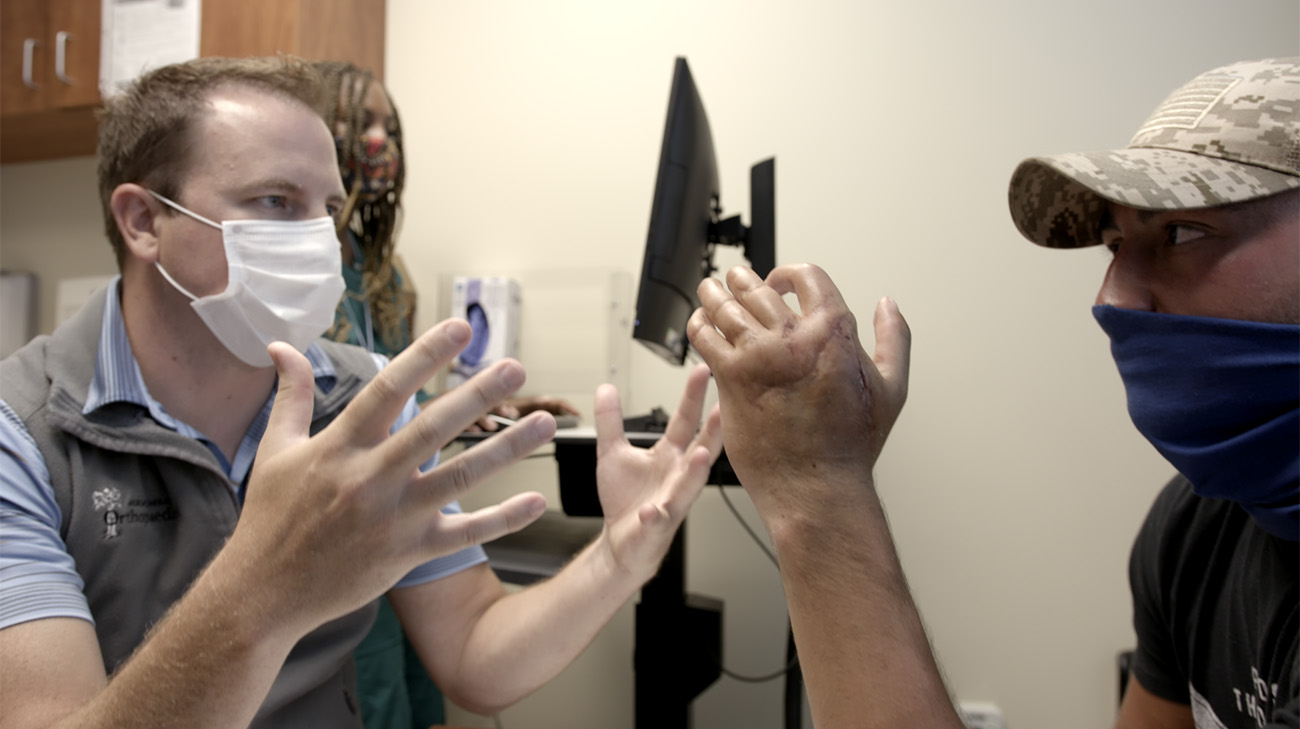 Luke endured months of painful physical therapy, as well as five additional surgeries to address the many issues that remained. The most recent operation was performed to correct the positioning of his pinkie finger.

“I was definitely in good hands,” says Luke, who feels ready for regular rounds of diaper changing when his fiance, Bella, gives birth to their daughter in November. “The whole staff did a good job of trying to make this as positive of an experience as possible.” 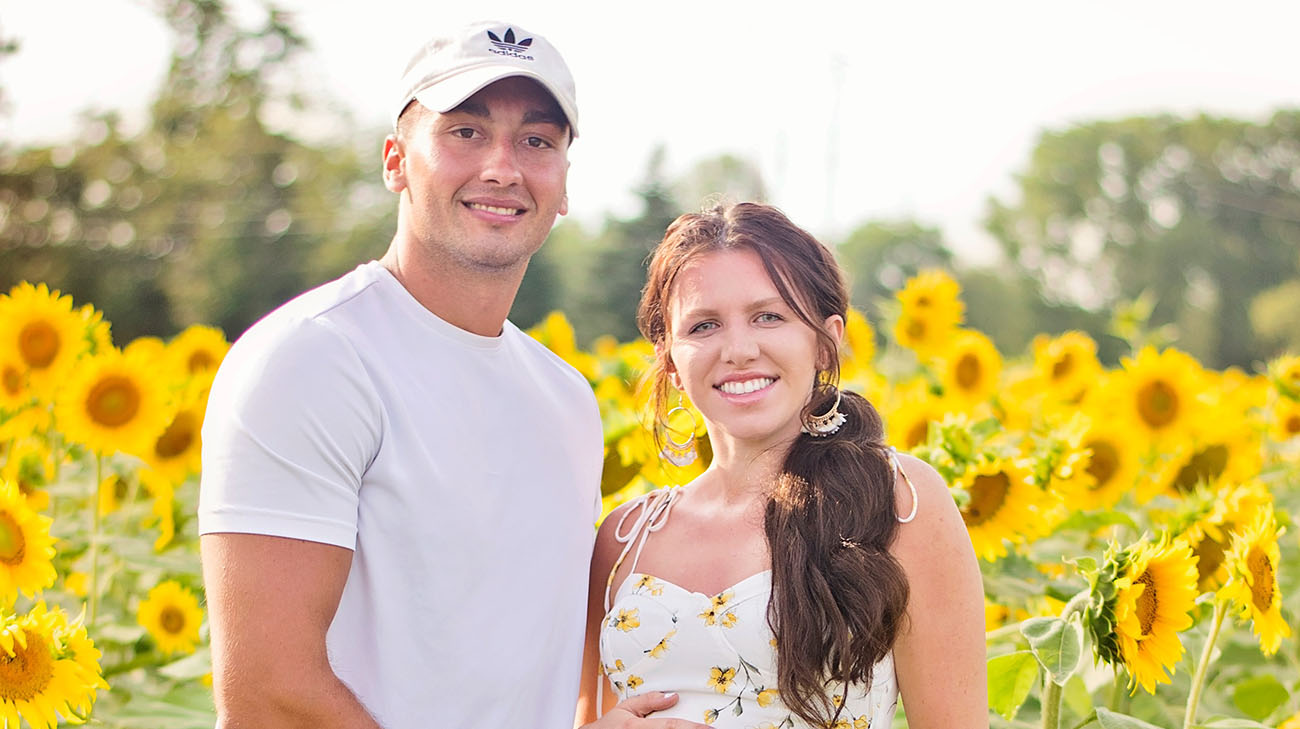 In November 2020, Luke and his fiance, Bella, will become parents to a little girl. (Courtesy: Luke Brittain)

That positivity was difficult in the first few days following the lengthy replantation surgery. To ensure blood was flowing to each finger, Luke’s fingernails were removed and nurses had to scrape the nail beds every hour. “It was brutal. I basically didn’t sleep for the first three or four days,” Luke recalls. “It’s probably the worst pain I'll ever experience in my life. But we had to do it to get as much use back in my hand as possible.”

Three to four times each week, Luke would attend lengthy physical therapy sessions designed to restore both the feeling in and use of his left hand. Driven by his competitive nature as an athlete, Luke soldiered on and did the painful exercises at home on his own, encouraged by family and friends.

Initially unable to tie his shoes or take a shower without help, Luke became more proficient in day-to-day tasks. Today, he is back at work on the grounds crew at Kent State University's Stark campus, his alma mater, and volunteering as an assistant coach for a high school baseball team in Louisville, Ohio.

And while Luke’s days of playing competitive baseball are likely over, he is playing catch again in the backyard, easily gripping and tossing a baseball with the left hand he thought was lost forever. Dr. Lanzinger has been impressed: “The other caregivers and I only played a small part in his journey. Luke should be proud of the work he put in, and the resilience he has shown, to make it this far.”