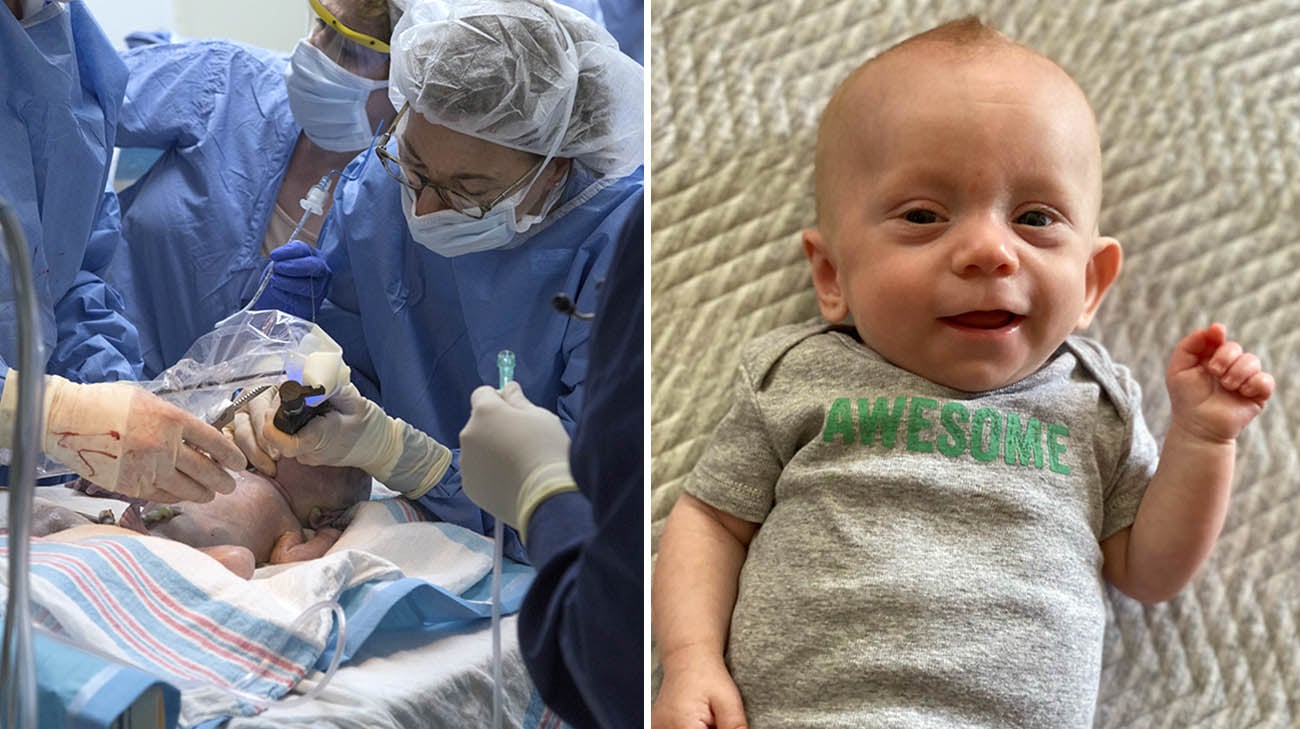 Twenty-seven weeks into her pregnancy, Adrianna Mashburn and her husband, Micah, were told to prepare for the worst. Adrianna’s odyssey began during a third trimester visit to her local OB/GYN when she felt her stomach was growing larger than she experienced during pregnancy with her now 2-year-old son, Micah.  An ultrasound revealed unborn baby Maverick’s conditions.

Doctors near the couple’s home in North Lima, Ohio, found a large mass in Maverick’s right lung –a life-threatening birth defect called congenital pulmonary airway malformation (CPAM). Physicians also discovered a related condition, hydrops fetalis. It’s a serious illness that consists of fluid buildup inside or around the lungs and/or heart. Despite a series of steroid shots to help reduce the fluid buildup, Maverick’s condition worsened. 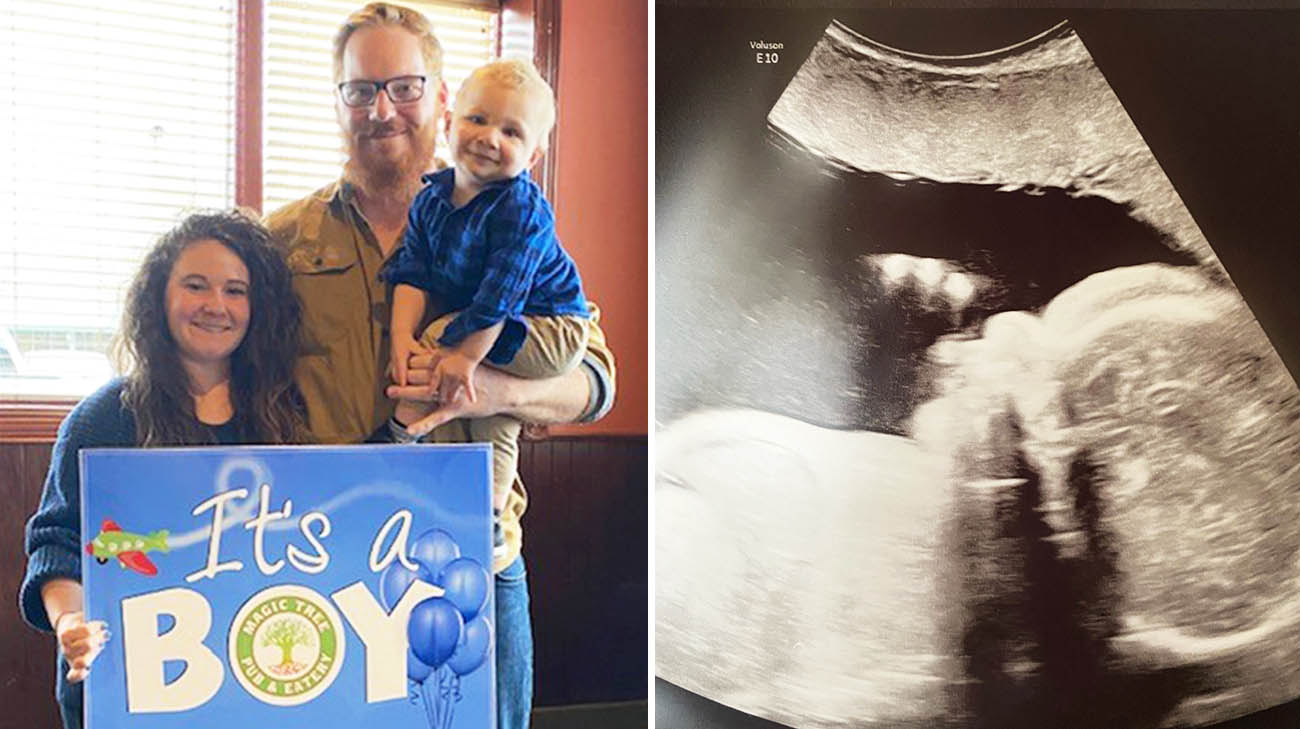 “When they first told us, we were very sad and definitely nervous,” says Adrianna. “My (obstetrician) did some research and told us to go to an expert at Cleveland Clinic. If we hadn’t, I don’t think we would have had the same outcome.”

Adrianna and Micah met with Darrell Cass, MD, director of fetal surgery and a pioneer in the development of ex-utero intrapartum treatment (EXIT) procedures for fetuses with airway obstructions or large lung malformations. “We didn’t even know (EXIT-to-resection) was an option, but when Dr. Cass explained it, we liked the idea of getting out in front of the problem instead of waiting until Maverick was born,” says Adrianna.

In order to perform EXIT-to-resection, doctors partially deliver the baby via C-section. While the baby is connected to the umbilical cord, a surgeon opens the baby's chest and removes the mass. (Courtesy: Cleveland Clinic)

According to Dr. Cass, CPAM can severely complicate birth if it is large. Maverick’s was about seven centimeters, which he described as being quite large in a fetus weighing around 5 ½ pounds. The plan was to “partially” deliver Maverick by Cesarean section. While the baby was still connected to the umbilical cord, and able to receive oxygen and nutrients from the placenta, Dr. Cass would perform EXIT-to-resection. This meant opening Maverick’s chest and removing the mass.

“I was worried the baby would have immediate respiratory failure (upon birth), and that just sets up a really bad situation, which would require emergency surgery while you're trying to ventilate him, while a huge mass is squashing his normal lungs,” explains Dr. Cass. “In this scenario there is very high risk of complications, including death or severe brain damage from lack of oxygen. ECMO (extracorporeal membrane oxygenation) could be an option, but that is associated with other complications including bleeding and stroke.” 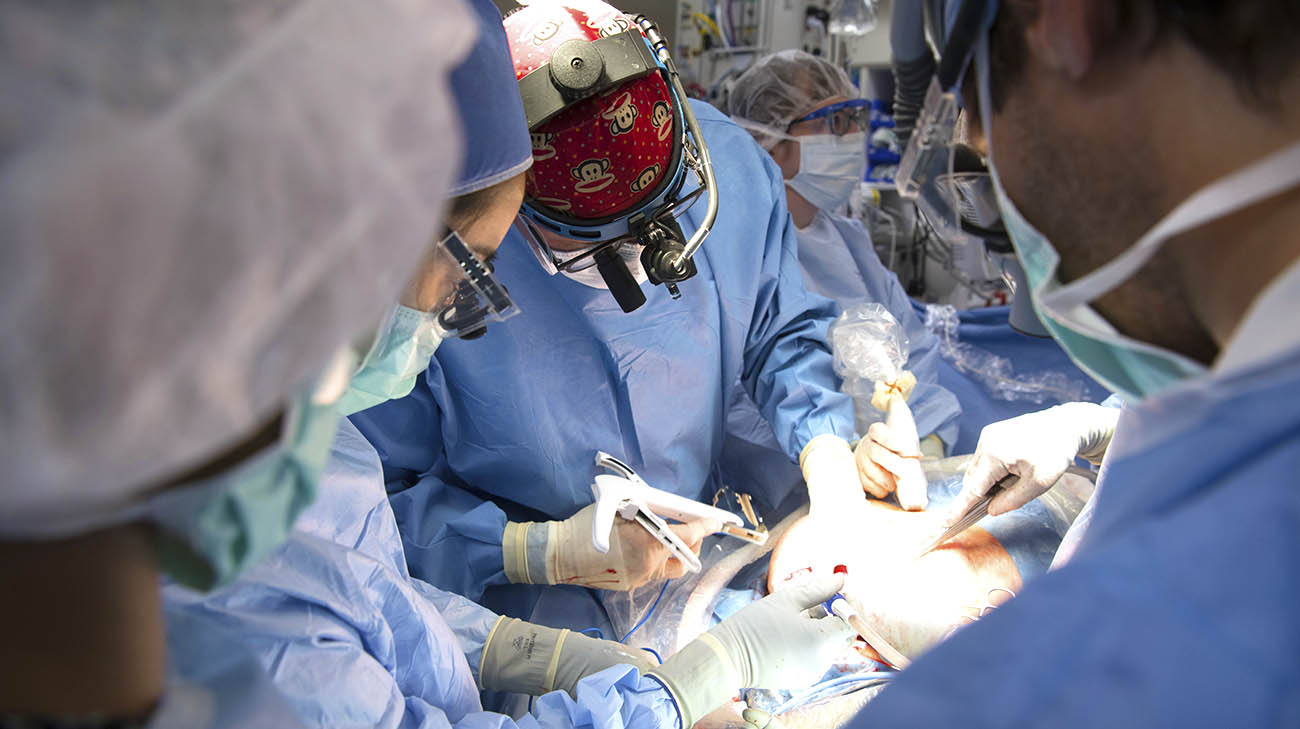 Adrianna was under general anesthesia for the delivery. During the procedure, doctors relaxed the uterus to prevent contractions and continued infusing fluid into the uterus so the placenta didn't try to separate. (Courtesy: Cleveland Clinic)

“An exit procedure is a big decision for the mother because she has to go under general anesthesia for the delivery,” says Amanda Kalan, MD, maternal-fetal medicine specialist. “We also do a lot of things differently from a routine Cesarean section. In order to maintain placental circulation during a fetal operation, we need to relax the uterus to prevent contractions and continue infusing fluid into the uterus so the placenta does not try to separate.”

With the mass pushing against the baby’s heart and esophagus, potentially leading to severe post-birth problems, Dr. Cass chose to move forward with the EXIT-to-resection procedure at 37 weeks gestation, almost full-term. 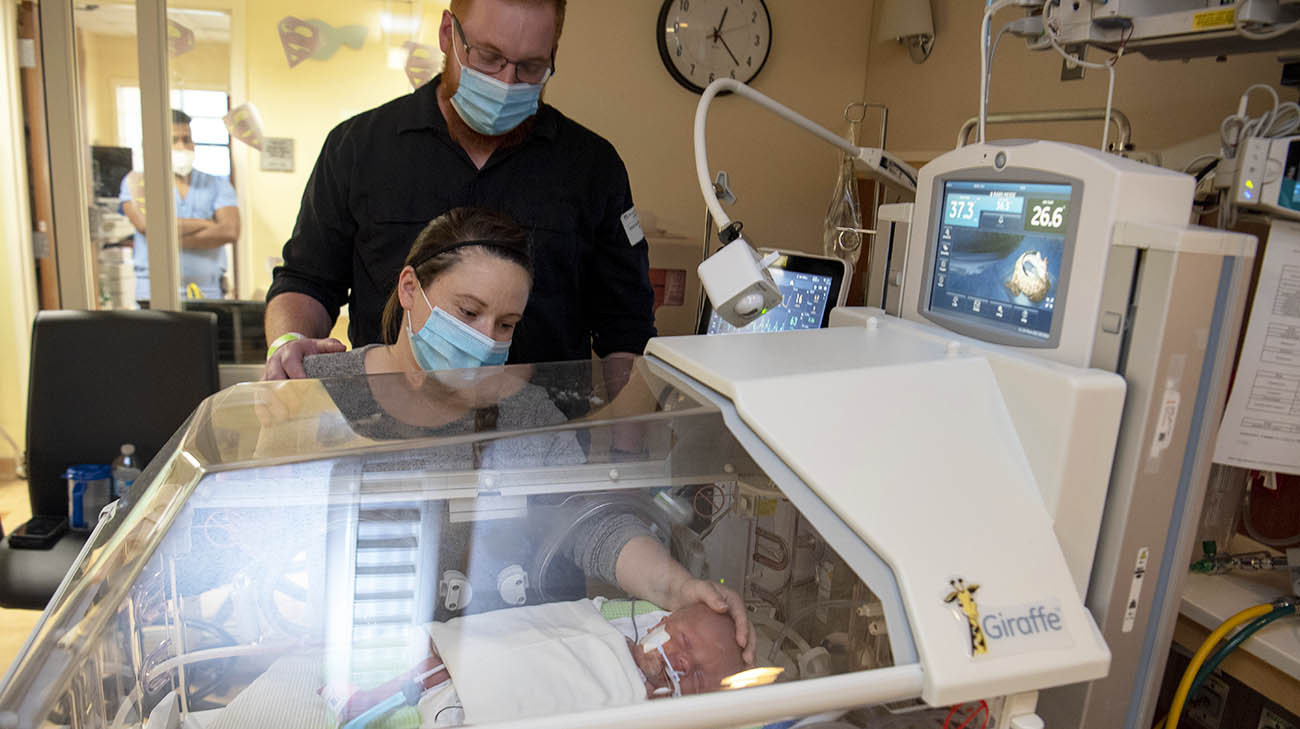 Two days before the delivery and EXIT-to-resection procedure, Dr. Cass led a run-through with the entire surgical team – which included experts in pediatric cardiology, maternal fetal medicine, obstetric anesthesia, pediatric anesthesia and other specialties. The all-hands-on-deck precautions were necessary because of Maverick’s severe medical condition and the difficulty it would pose as he transitioned from fetal to neonatal (newborn) life.

“Quite often, kids in this condition are dying or suffering severe complications, including brain damage,” he adds. “We thought EXIT-to-resection would be the best (option) for Maverick, but we had to be sure everybody knew their roles and were ready for troubleshooting anything that could happen.” 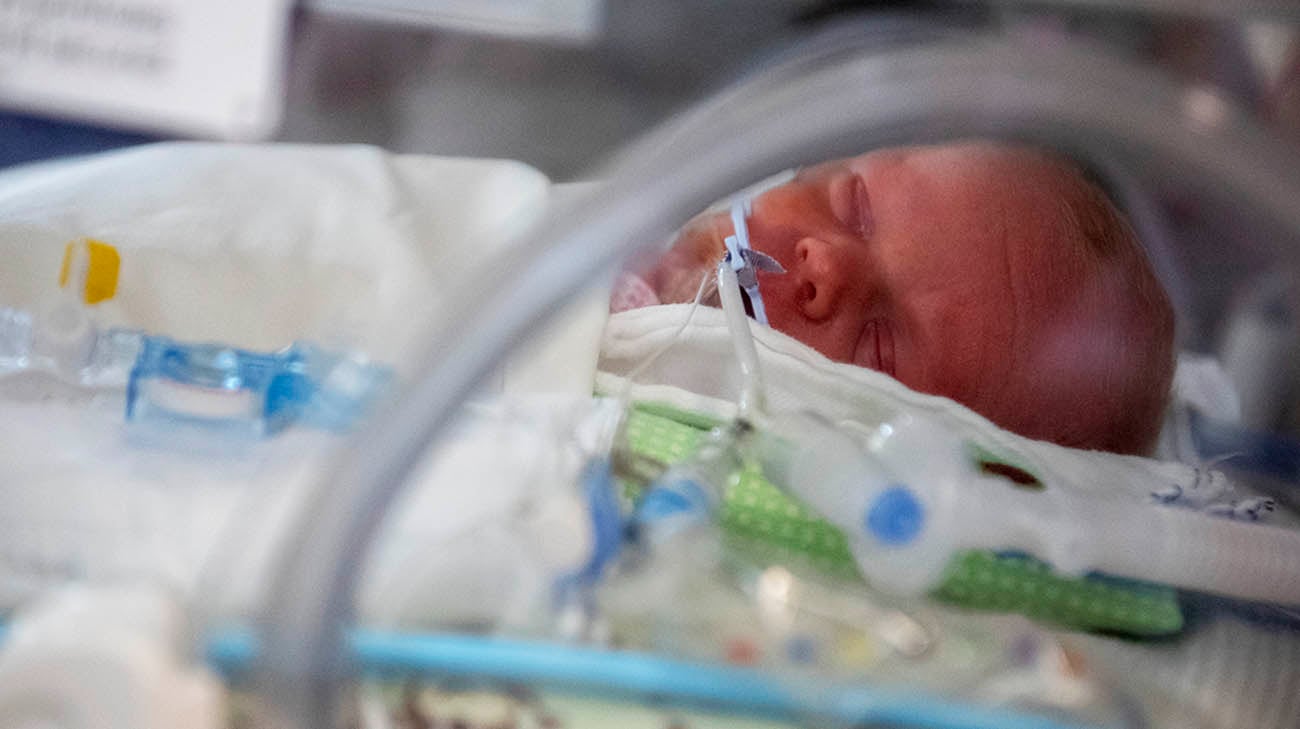 As the surgery proceeded, Dr. Cass knew he would have to work fast. “We had to be careful, because the placenta and umbilical cord were located right where we needed to work,” he explains. “The baby was getting bradycardic (slower heart rate), which means the umbilical cord was getting compressed.”

As quickly as possible, Dr. Cass inserted an IV into Maverick, opened his chest and began to remove the mass.That relieved pressure on Maverick’s heart and normal lung. Then, he cut the umbilical cord, and moved him a few feet to the adjoining operating table, where he was intubated, resuscitated and the clinical team successfully completed the procedure. “The placenta basically stopped working so we needed to make adjustments to the original plan,” notes Dr. Cass. “But we had a great team and a good setup in the operating room. I have a feeling Maverick is going to have a nice, quick recovery.”

The outcome was everything Adrianna and Micah could have hoped for – Maverick is alive and thriving. He spent six weeks slowly recovering in Cleveland Clinic Children’s Neonatal Intensive Care Unit (NICU) before Adrianna and Micah took him home to meet his brother. 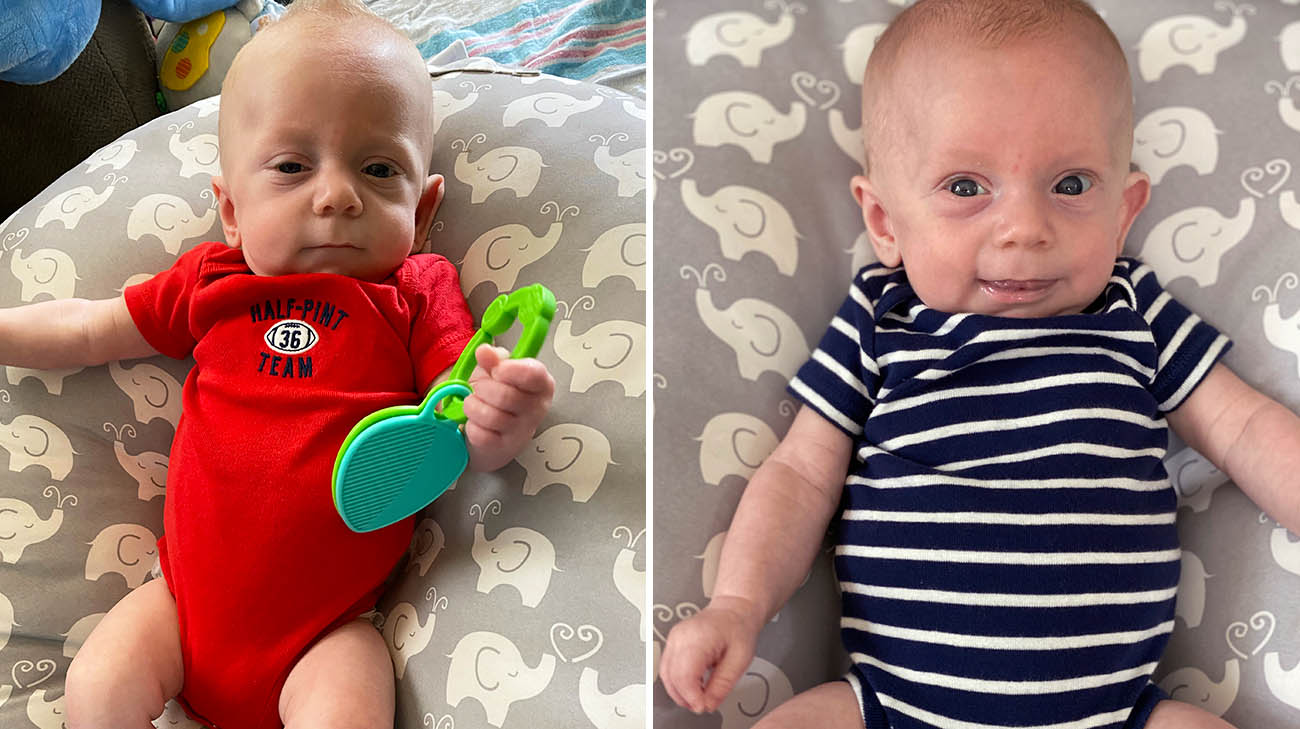 “For everything Maverick went through, he is doing really well and the doctors are impressed with all improvements he has made,” adds Adrianna. “I’m just so grateful.”