Ella passed her newborn hearing screening at birth, so her mom and dad, Jason, had every reason to believe she had typical hearing. “We have early family videos of her standing in front of a toy teapot and dancing to the music it played, so we know she could hear the music,” says Angelia.

But by the time Ella turned 2, she wasn’t developing language skills like her peers. Instead, she had her own language that her older sister would translate.

“Our older daughter had very advanced language skills, speaking in full sentences by the time she was 2 1/2. When we approached a speech-language pathologist about testing for Ella’s speech delay, she explained that it’s typical among siblings close in age to speak in their own language, so we assumed Ella was fine. We didn’t have any reason to believe otherwise,” says Angelia.

When the family moved to northeast Ohio, a new neighbor suggested a special preschool their son was attending. Ella qualified for the program due to her spoken language delay.

“As luck would have it, one of the teachers has a family member who is partially deaf. She observed behaviors that Ella was displaying and pointed them out to us, asking if we’d had Ella’s hearing checked. Even though we had, we decided we should have her tested again,” says Angelia.

Sound booth testing results were inconclusive due to Ella’s resistance to the screening. An auditory brainstem response (ABR) test was done with Ella under anesthesia. The test monitors brainstem response to see if the ears are transmitting sound to the brainstem. 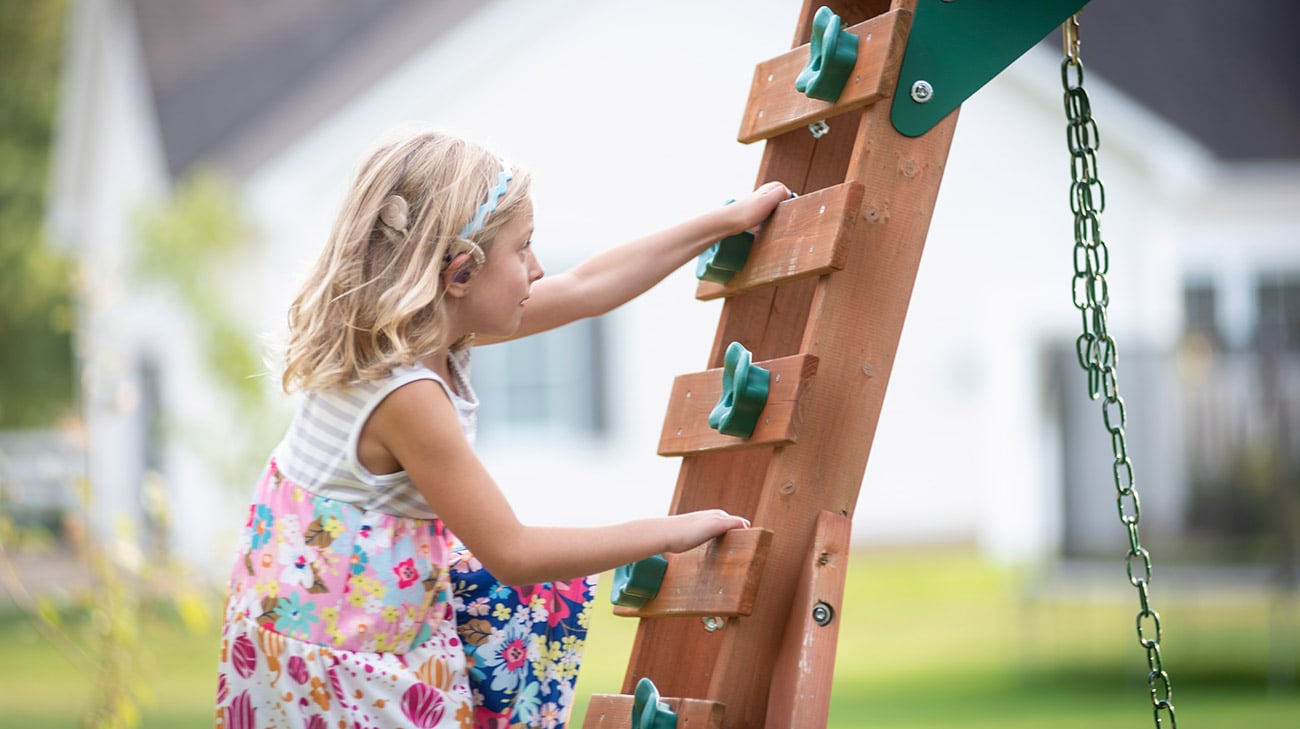 The middle child, Ella's mom describes her as the rough and tumble kid of the family, always looking for the next adventure. Her hearing implant has helped her communicate and pay attention at home, at school, and during activities like soccer, swimming and gymnastics. (Courtesy: Cleveland Clinic)

“We learned that our daughter had significant hearing loss, which was quite a shock as we’d been working down this path that it was a speech delay,” says Angelia. “But we now had an amazing team of Cleveland Clinic physicians, audiologists, and speech-language pathologists and patient advocates working with us, along with school representatives, to help us figure things out.”

Ella was diagnosed with asymmetric hearing loss. The hearing in her right ear is poorer than in her left.

“Once Ella’s hearing loss was diagnosed, the entire team started to work concurrently to begin the evaluation and management of her hearing loss. Evaluation included imaging studies to check for anatomical causes of hearing loss, consult with genetics and other testing,” says Samantha Anne, MD, a pediatric otolaryngologist and Medical Director of Pediatric Ear and Hearing Disorders at Cleveland Clinic Children’s. “At the same time, a speech-language pathologist began to evaluate and track her speech and language development, and an audiologist fit her with hearing aids and started following Ella’s response to the hearing aids.”

Testing did not identify a cause for Ella’s hearing loss, but it is believed to have been progressive since she exhibited the ability to hear at birth.

“We found that her left ear could hear well with a hearing aid, but she was not able to repeat back words heard with her right ear even with a powerful hearing aid,” says Karen Petter, AuD, CCC/A, a clinical audiologist at Cleveland Clinic. “We know that one ear hearing well is not enough for optimal outcomes.”

Cleveland Clinic Communication Specialist Donald Goldberg, PhD, CCC-SLP/A, conducted baseline testing of Ella when she was 4 years old. “At that time, she was functioning at a very low level – below the first percentile – for speech and grammar. She had words, but they were poorly articulated, and she could not put them together in any grammatical structure,” he explains.

Collaborative efforts led to the suggestion that Ella receive a cochlear implant.

“A cochlear implant can provide increased speech understanding and sound recognition for patients who have significant sensorineural hearing loss and don’t receive enough benefit from hearing aids,” says Sarah Sydlowski, AuD, PhD, Audiology Director of Cleveland Clinic’s Hearing Implant Program (HIP). “Historically, cochlear implants have been for those with profound hearing loss in both ears. In recent years, we’ve realized that’s not the best way to approach candidacy. Today, we observe the ears individually to make sure we’re optimizing the hearing and understanding ability in each ear and we don’t wait until it is last resort.”

Ella underwent cochlear implant surgery with Dr. Anne. During surgery, the device is implanted or placed in the inner ear. Made up of internal and external parts, the cochlear implant’s receiver/stimulator is implanted in the temporal bone behind the ear, and the electrode array is placed in the cochlea of the inner ear. The device also includes the sound processor, which is worn behind the ear. The sound processor converts speech and sounds into electrical energy. The implant directly stimulates the hearing nerve.

According to Dr. Sydlowski, Ella is a wonderful example of someone who would not have been considered a traditional cochlear implant candidate. As with any cochlear implant, the decision to move forward with Ella’s was truly a group effort involving multiple meetings with her parents, Cleveland Clinic’s HIP team, representatives from Ella’s school, and private therapists. 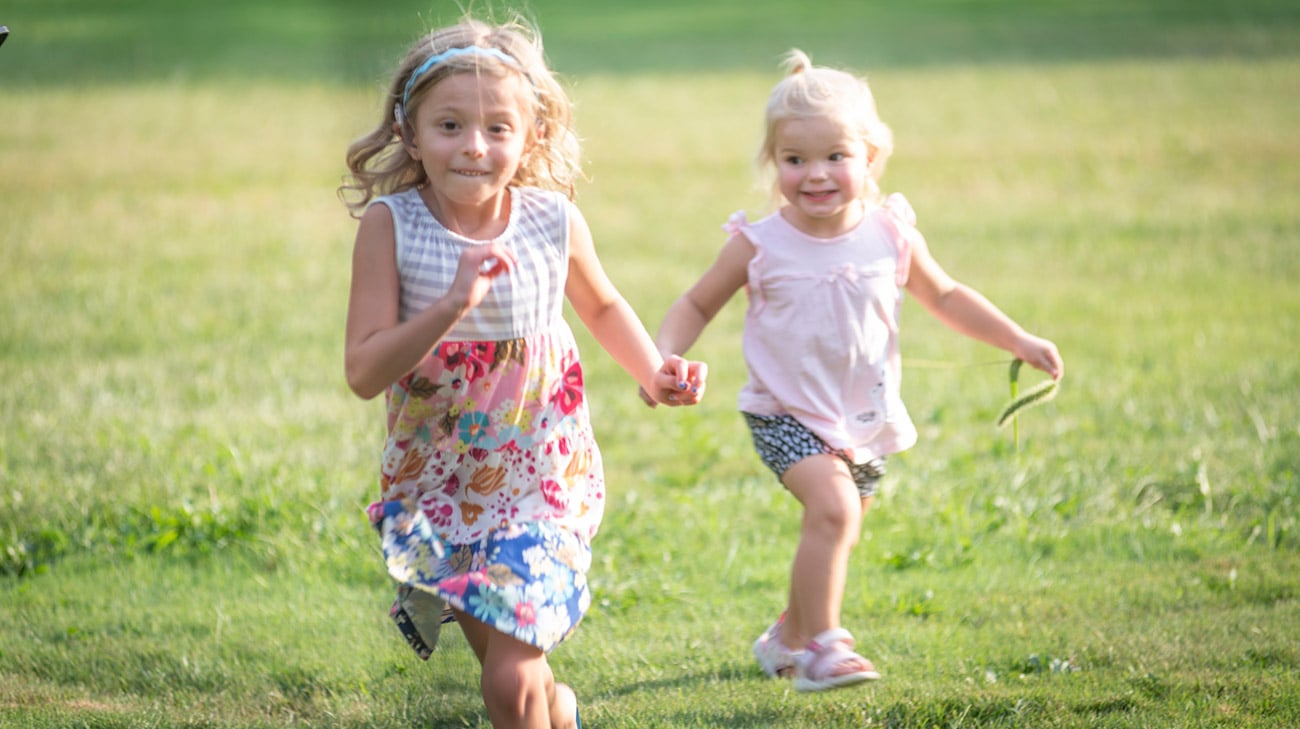 With the improvement in Ella's communication skills, she's not as much a follower of her older sister any more. She takes and own path, and she leads sometimes. In this photo, her younger sister Cora follows. (Courtesy: Cleveland Clinic)

“We assessed what was best for Ella, put together a plan to get the implantation done at the appropriate time, then moved forward expeditiously and seamlessly,” says Dr. Anne. “One of the things I’m very proud of is how coordinated our team is in getting the family to where they need to be.”

Angelia remembers that Ella was terrified when she first got hearing aids, unsure of the sounds around her. “But when her cochlear implant was activated, you could see this amazement in her face that something else was happening, that a change was coming though her brain didn’t quite understand it yet,” she says.

“Thanks to therapy, technology and the amazing support of her family, Ella has experienced not only an explosion of her speech and language, but also her listening skills. She’s doing better than other children her age,” said Dr. Goldberg.

Despite having to make the difficult decision to move forward with the implant, Angelia and Jason have no doubt that they made the right decision. They explain that Ella’s quality of life, her ability to make friends and engage with others is dramatically improved.

“She’s learned self-advocacy. She is learning to read. She knows the sounds of her letters. She’s a happy kindergartner. She’s excelling in school,” says Angelia. “We couldn’t ask for more for our child.”