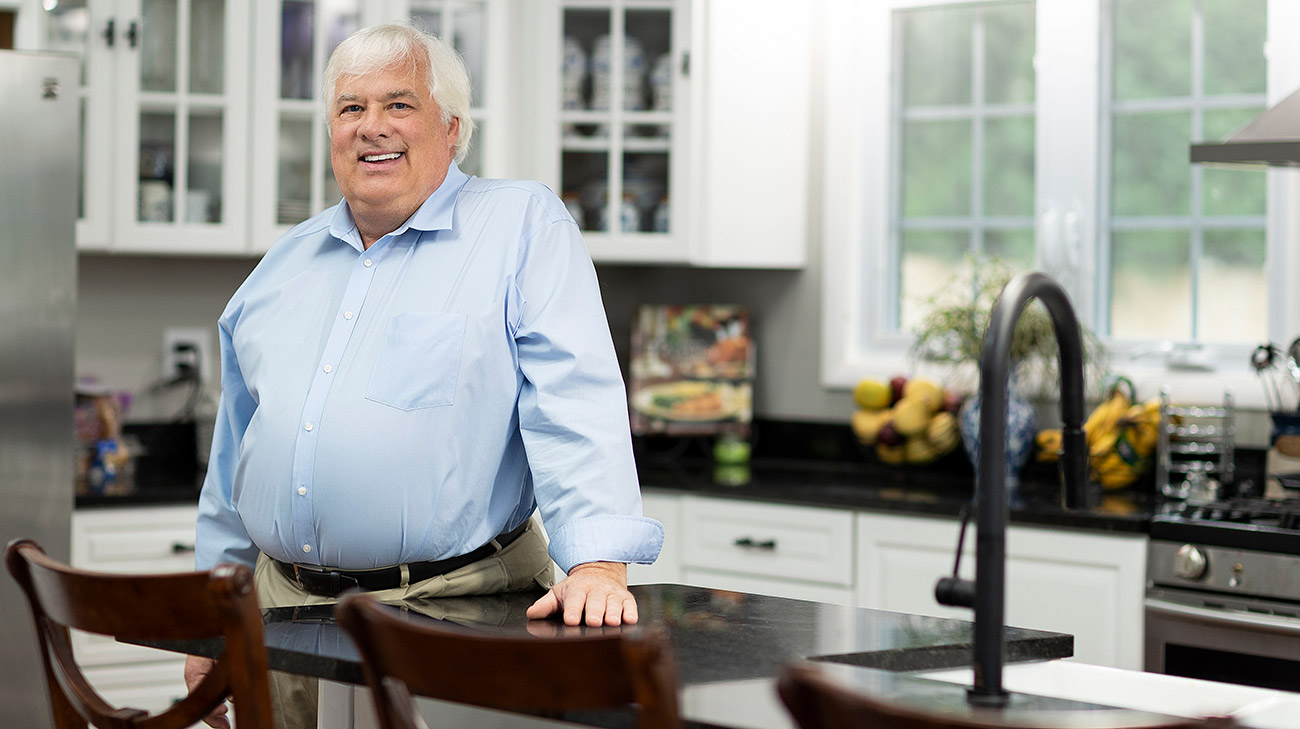 It was New Year’s Eve 2018. Fairlawn resident Steve Milton was preparing for a party when the abdominal pain that had pestered him for months became excruciating.

Three years earlier, Steve had been diagnosed with diverticulitis. Treatment had been successful. But in August 2018, the pockets in his intestinal walls once again became inflamed and infected.

He was in and out of the hospital for four months. He took round after round of antibiotics — and battled allergic reactions and a C. diff infection. But he had never experienced the intense pain that now caused him to double over.

Instead of ringing in 2019, Steve and his wife, Barbara, sped to the nearest emergency department. Soon Steve learned that he had a perforated bowel — one of the inflamed pockets had burst open. His large intestine (colon) was leaking waste into his abdomen.

That began a one-week stay at Cleveland Clinic Akron General, where Steve received intravenous antibiotics and learned that he would need surgery to remove the diseased part of his colon.

“I had been healthy most of my life,” he says. “Besides feeling so sick physically, it bothered me emotionally too.”

Before his surgery, Steve met with a patient care coordinator who explained his two options.

“They could do the surgery one way, involving a seven-to-10-day hospital stay and lots of pain medication,” says Steve. “Or they could do it a new way that would have me up and around within hours of the operation, with much less pain. It was an easy decision.”

On a Friday, Steve had a four-hour surgery to remove 12 inches of his large intestine. Four hours later, he was out of bed, walking the halls at Akron General. He had no pain and no nausea. By Sunday afternoon, he was home. And by Monday morning, the software sales representative was back to work in his home office.

“I had a major surgery and missed only one day of work!” says Steve. “Barbara, who has been an ER nurse for 30 years, was shocked at how well I was doing. My friends and family called it miraculous.”

“I encourage anyone thinking about colon resection to cheer up! After what I was going through with diverticulitis, the surgery was the best experience I could have imagined.”

But it really wasn’t a miracle, just a new protocol introduced at Akron General by Steve’s surgeon, Mark Horattas, MD. Called “Enhanced Recovery After Surgery” (ERAS), the method upends traditional practices, such as not eating the day before and often many days after surgery, and using only opioids to ease pain.

“ERAS uses a shorter bowel prep before colorectal surgery,” says Dr. Horattas. “Patients drink clear liquids, nutritional supplements and Gatorade for up to two hours before surgery to stay hydrated and nourished. ERAS also uses different anesthesia techniques to avoid bowel function problems that we traditionally saw after surgery. Now patients can get out of bed and eat right away.”

A hallmark of ERAS is preventing the pain caused by surgery, rather than waiting to manage it when it occurs. Long-acting nerve blocks and non-opioid pain medications minimize patients’ pain from incision through recovery.

Avoiding the disability and longer hospital stays that came with traditional surgical approaches, ERAS can decrease risks of complications like infections, blood clots and respiratory problems.

ERAS is now the standard procedure for all colorectal surgeries at Akron General, says Dr. Horattas. It is also available for some breast and bariatric surgeries, and is gradually being offered for some gynecologic and urologic surgeries.

In addition to improving patient satisfaction, ERAS saves more than $3,000 per patient thanks to shorter hospital stays and fewer complications, he says.

“Recovering from my colon resection was comparable to having a toothache,” says Steve. “I had a hernia repaired five years ago, and that recovery was much more painful.”

Steve took only one pain pill after his colon surgery — after walking the dogs the day he returned home.

“I did too much too soon, but I was feeling too good,” he says. “I encourage anyone thinking about colon resection to cheer up! After what I was going through with diverticulitis, the surgery was the best experience I could have imagined.”

“I’m happy I have a prosthetic leg. I wouldn’t be getting the opportunities I have today without it.”