Patient and Surgeon Take on Cancer with ‘One Punch’ 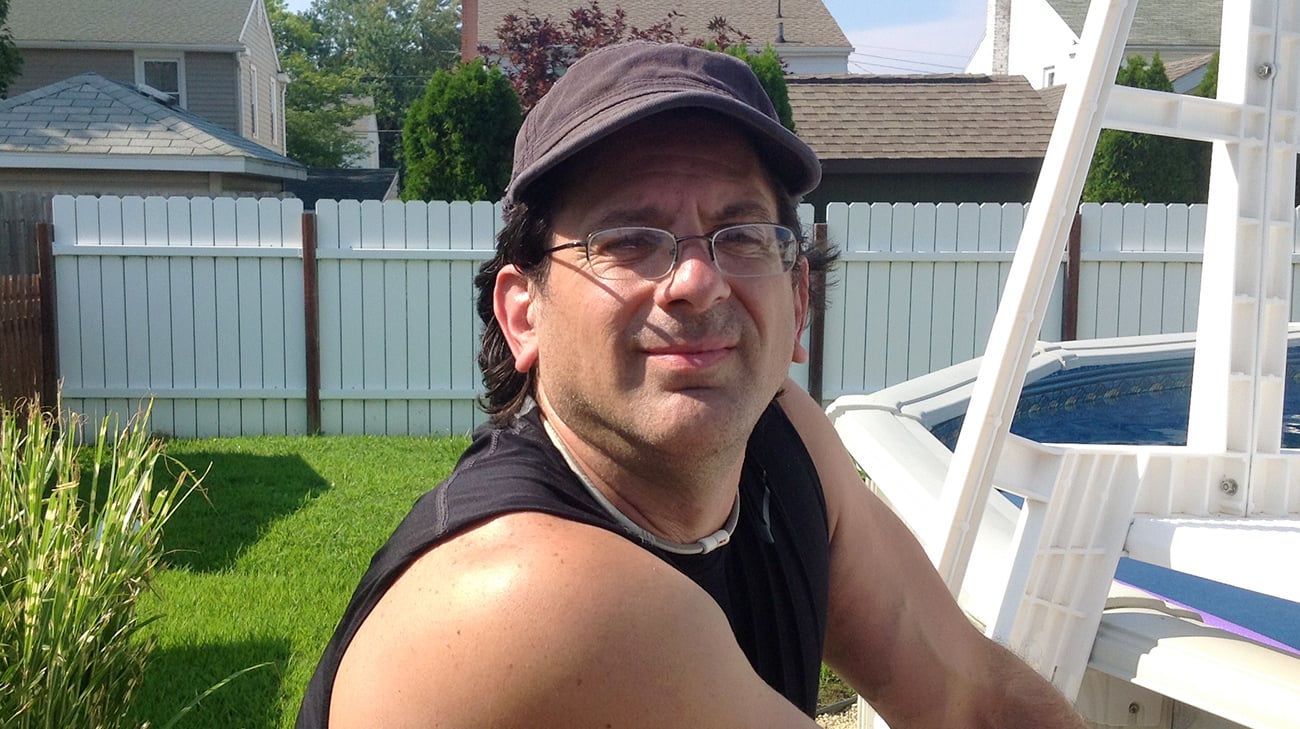 Cancer of the bile duct, or cholangiocarcinoma, is extremely rare. In most patients, the tumor cannot be completely removed with surgery and is incurable.

But 51-year-old Nicholas Belluomini of Erie, PA, is optimistic about his prognosis. Because, in his own words, he is “lucky enough to live just an hour-and-a-half drive from the best hospital with the best doctors, Cleveland Clinic.”

Following a 4th of July cookout in 2017, Nick felt sick to his stomach. He thought he’d eaten too much, but felt better after he vomited. The next morning when he woke up to go to work, he didn’t feel well. And his wife Karen noticed yellowing in his eyes.

Nick still thought it was just a matter of overdoing it. But as the day went on, his eye color didn’t improve, so he called his local primary care physician who immediately scheduled Nick for bloodwork.

Diagnosed with Hepatitis A, Nick was told to change his diet, eat a lot of greens and drink plenty of water.

Five weeks passed, and Nick was itching like crazy. He went to the emergency room at his local hospital where they confirmed the Hepatitis A diagnosis, but referred him to a specialist who came to the same conclusion.

“Dr. Aucejo and the team at Cleveland Clinic saved my life. And while I can’t quite shake the feeling that I’m still fighting a killer that I can’t see, I’m living life to the fullest. I am so grateful for the opportunity to spend more time with my wife and two sons.”

Because he was at his wits end with the itching, and his family had previous experience with Cleveland Clinic, Nick and Karen drove to the Cleveland Clinic’s emergency department. Within just a couple of hours, Nick was presented with a life-changing diagnosis. He had perihilar cholangiocarcinoma, a very rare form of bile duct cancer.

“This is a very aggressive cancer, and it’s difficult to diagnose because it typically doesn’t cause any symptoms until it is very advanced,” says Federico Aucejo, MD, Director, Cleveland Clinic Liver Cancer Program.

Nick’s jaundice and itching triggered a need for imaging, so he underwent a CT scan and MRI of his liver that showed an area of stricture involving both right and left bile ducts with a larger involvement of the left bile duct.

“When the tests came back, everyone was very concerned that maybe it was too late. According to Dr. Aucejo, when they find this type of cancer, it’s usually very advanced and there isn’t much they can do. In my case, they found it early and felt that, with proper treatment and surgery, they could remove the entire tumor,” says Nick.

Following his diagnosis, Nick underwent two ERCP (endoscopic retrograde cholangiopancreatography) procedures – a combination of an upper gastrointestinal endoscopy and X-rays to treat problems of the bile and pancreatic ducts. He also had stents placed in an attempt to lower elevated bilirubin levels in his blood (high bilirubin causes jaundice, a medical condition with yellowing of the skin or whites of the eyes).

For Nick to be a candidate for surgery, Dr. Aucejo needed to know he could keep at least 30 percent of his liver intact. Tumor margins showed that was possible. With no other liver function issues, Nick was scheduled for surgery on Sept. 22, 2017.

From conversations with Dr. Aucejo, Nick knew the risks of surgery, and that it was critical to his future health that all the cancer be removed. “I wasn’t scared about the surgery – I couldn’t wait to have another shot at being healthy. But I was afraid Dr. Aucejo might not get it all — that he might get in there and realize he’d just have to close me back up,” he says.

The nine-hour surgical procedure resulted in Dr. Aucejo removing the entire left lobe of Nick’s liver, along with part of the right lobe and the common bile duct. “It was a very extensive operation in which I had to reconstruct Nick’s entire biliary system,” explains Dr. Aucejo.

Nick awoke in the recovery room feeling stronger and no longer itching. “As I awoke, I remember looking into the eyes of an ICU nurse who told me I was going to be ok,” recalls Nick.

Ten days post-surgery, Nick was discharged. Mentally, he was ready. But physically, problems developed — including nausea and green discharge from his incision. He and his wife headed back to Cleveland, where Dr. Aucejo was waiting to operate. He re-opened Nick’s incision to conduct exploratory surgery, clean out accumulated bile, and place multiple drains.

“Nick was experiencing biliary leakage, which happens in 10 to 15 percent of cases. With the second surgery, we used drains to reroute the flow of bile. That decreased the amount of bile near the leak, helping that area to heal,” says Dr. Aucejo.

Since then, Nick has undergone a long, slow recovery process that included several rounds of systemic chemotherapy – designed to kill any possible remaining cancer cells – administered under the care of Bassam Estfan, MD, a Cleveland Clinic Cancer Center physician who specializes in gastrointestinal (digestive) malignancies. “The medication was delivered to my home. I’d take six pills each day for two weeks, then take a week off. During that off week, I’d come to Cleveland for check-ups with Dr. Estfan,” says Nick.

In the nine months since his surgery, Nick’s regained much of the weight he lost. He returns to Cleveland Clinic to see both Dr. Estfan and Dr. Aucejo for routine check-ups and imaging studies to verify that the tumor has not returned, and all results to date have come back clear. These routine check-ups will continue for at least five years.

“I'm lucky that my eyes turned yellow. If they hadn’t, I would not be here,” says Nick. “Dr. Aucejo and the team at Cleveland Clinic saved my life. And while I can’t quite shake the feeling that I’m still fighting a killer that I can’t see, I’m living life to the fullest. I am so grateful for the opportunity to spend more time with my wife and two sons.”