Vocal cord lesions are benign (non-cancerous) growths that may include nodules, polyps and cysts. Vocal trauma or overuse is associated with these lesions.
Vocal Cord Lesions (Nodules, Polyps and Cysts) Menu

What are vocal cord lesions?

Vocal cord lesions, also known as vocal fold lesions, are benign (noncancerous) growths that include nodules, polyps, and cysts. All can cause hoarseness and may be associated with vocal overuse or vocal cord trauma. 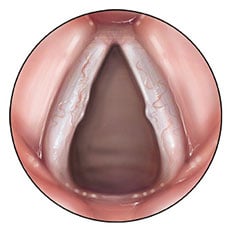 Vocal cord nodules, sometimes called singer’s nodules or nodes, result from repetitive overuse or misuse of the voice. These callous-like growths develop in the midpoint of the vocal folds. Vocal cord nodules look like calluses under the microscope and are occasionally associated with abnormal blood vessels. Women between the ages of 20 and 50 years old are more prone to vocal cord nodules, but both men and women can be affected. 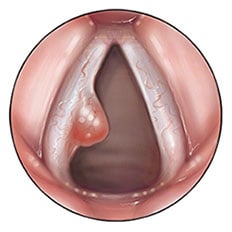 Vocal cord polyps are different from nodules because they can occur on either one or both vocal cords. They tend to be more vascularized than nodules, meaning they have more blood vessels and appear reddish in color. These growths can vary in size and shape, but are usually larger than nodules and resemble blisters. Like vocal cord nodules, polyps can be caused by overuse or misuse of the voice, but can also be caused by a single episode of vocal abuse (such as yelling at a sports event). Another type of vocal cord polyp, polypoid corditis (Reinke’s edema), is associated almost exclusively with smoking.

Both vocal cord nodules and polyps can be caused by different forms of trauma, including singing (particularly in professional singers), screaming, cheerleading, and excessive talking (such as that by a teacher, coach, salesperson or radio personality). Other causes include extra muscle tension when speaking, smoking, alcohol use, sinusitis, allergies, and rarely, hypothyroidism. 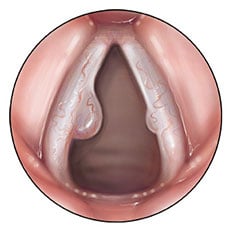 Vocal cord cysts are growths that have a sac around a fluid-filled or semisolid center. These are less common than vocal cord nodules and polyps. There are two types of vocal cord cysts, mucus retention cysts and epidermoid (or sebaceous) cysts. Cysts are not typically associated with overuse of the voice or vocal fold trauma.

Vocal cord lesions also can be caused by using the voice while one is sick with an upper respiratory infection or laryngitis.

What are the symptoms of vocal cord lesions?

Patients with vocal cord nodules or polyps may describe their voice as harsh, raspy, or scratchy. There may be frequent voice breaks, easy vocal fatigue with use or there may be a decreased range of vocal sounds. Pain is another symptom that is felt as a shooting pain from ear to ear, general neck pain or as a lump in the throat. Patients may also experience frequent coughing, throat clearing, or general fatigue.