What are invasive EEG recordings and when are they needed?

These recordings are done to better localize the region of the brain from which the epilepsy is arising from. The placement of these electrodes are often confirmed with co-registration on an MRI san image.

Both of these functional localization techniques may be done separately during the operation as a part of the intraoperative neurophysiological monitoring. 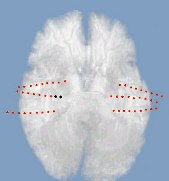 Depth EEG electrodes are those electrodes which are placed within the substance of the brain. The placement of these electrodes is often confirmed with co-registration on an MRI scan image.

The figure to the left shows an MRI image of the brain showing the position of electrodes which were placed into the substance of the brain into regions called the temporal lobes and specifically into a structure called the amygdala and hippocampus.

These structures are frequently involved in the generation of seizures experienced in patients with temporal lobe epilepsy. These electrodes are called “depth electrodes.”

Functions that can be tested using this technique include language, vision, movement, and sensation. 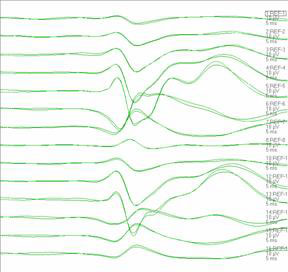 This image shows a subdural electrode recording of waveforms emanating from the brain. These waveforms were derived from the brain following the stimulation of a nerve located in the hand called the “median nerve.” These responses give important information regarding the regions of the brain controlling hand function.

Cortical somatosensory evoked potentials are used to locate an important structure in the brain, called the central sulcus.

The brain’s surface is formed by ridges and valleys, the valleys are called ‘sulci’ or ‘sulcus.’ One important such valley lies between the regions of the brain which control movement and sensation.

By stimulating a nerve on the arm, face or leg and recording brain waves in response to the stimulation with the aid of a computer, location of the sulcus can be performed.

Need appointment or locations information for services in Cleveland and nearby suburbs?