Varices are dilated submucosal veins, most commonly detected in the distal esophagus or proximal stomach. Varices are associated with portal hypertension of any cause including presinusoidal (portal vein thrombosis), sinusoidal (cirrhosis) and postsinusoidal (Budd Chiari syndrome) causes the commonest being cirrhosis. Despite advances in therapy over the last decade, variceal hemorrhage is associated with a mortality of at least 20% at 6 weeks.

Gastroesophageal varices are present in approximately 50% of patients with cirrhosis. There is a good correlation with the severity of liver disease; while only 40% of Child A patients have varices, they are seen in 85% of Child C patients. Gastric varices are less prevalent, occurring in 5% to 33% of these patients. Variceal hemorrhage occurs at a yearly rate of 5% to 15%. The most important predictor of hemorrhage is the size of varices; the larges varices are at highest risk of bleeding. Other predictors of hemorrhage are decompensated cirrhosis (Child B/C) and the endoscopic presence of red wale marks.

In cirrhosis, portal pressures initially increase as a consequence of resistance to blood flow within the liver. This resistance is due mainly to fibrous tissue and regenerative nodules in the hepatic parenchyma. In addition to this structural resistance, there is intrahepatic vasoconstriction. This is believed to be due to decreased production of endogenous nitric oxide.

However, portal hypertension occurs despite the compensatory formation of collaterals for 2 reasons: (1) an increase in portal venous inflow that results from splanchnic arteriolar vasodilatation and (2) insufficient portal decompression through collaterals as these have a higher resistance than that of the normal liver.

Nonbleeding varices are generally asymptomatic. Once varices are bleeding, patients classically present with symptoms of an upper gastrointestinal hemorrhage such at hematemesis, passage of black or bloody stools, lightheadedness, or decreased urination. Associated signs of variceal hemorrhage include decompensated liver function manifested as jaundice, hepatic encephalopathy, worsened or new-onset ascites. Physical examination will likely reveal hypotension or shock (in severe cases), pallor and stigmata of chronic liver disease such as spider angiomatas, palmar erythema, gynecomastia, or splenomegaly. A rectal examination should be performed on all patients without obvious bleeding. A black tarry stool on the gloved finger suggests an upper gastrointestinal source, and further workup needs to be pursued. Hemoccult testing is not necessary because clinically significant bleeding should be apparent with visual inspection of the stool alone.

The gold standard for the diagnosis of varices is esophagogastroduodenoscopy (EGD). It is generally recommended that patients with cirrhosis undergo elective endoscopic screening for varices at the time of diagnosis and periodically thereafter if no or small varices are detected (Figure 1). If screening EGD reveals appreciable esophageal varices, a size classification should be assigned. Different size classification systems have been used over the years; however, a recent consensus meeting proposed that varices be categorized in only two grades, small and large. An appropriate cut-off was determined to be 5mm; that is, small varices are those less than 5mm and large varices are those greater than 5mm. 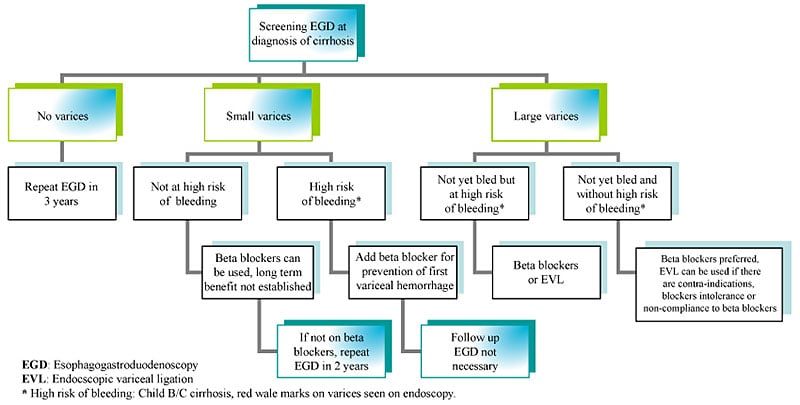 Another procedure that is currently being studied for screening for varices is esophageal capsule endoscopy. Pilot studies suggest it is safe and well tolerated (and does not require sedation), although its sensitivity and cost effectiveness still need to be established.

If a patient has small varices that have never bled and has no risk factors for a first variceal hemorrhage like high Child-Pugh score, continued alcohol use and presence of red wale markings, prophylactic strategies can be considered, although the long-term benefit has not been established. In our practice, primary prophylaxis for bleeding has often been reserved for those who have small varices with risk factors listed above and for all patients with large varices.

The primary pharmacologic strategy for preventing variceal hemorrhage is use of nonselective beta blockers, particularly propranolol and nadolol. These medications reduce portal pressures both by decreasing cardiac output and by producing splanchnic vasoconstriction. Several studies have shown that nonselective beta blockers decrease the risk for first variceal hemorrhage by 40% to 50% when compared to patients taking placebo. A meta-analysis has also showed a statistically significant decrease in overall mortality. Selective beta-blockers, such as atenolol and metoprolol, are less effective and are not currently recommended for primary prophylaxis. Likewise, use of isosorbide mononitrate (alone or with nonselective beta blockers) is not currently recommended.

Propranolol is usually started at a dose of 20 mg twice daily and nadolol at a dose of 40 mg daily. The goal of therapy is to reduce the WHVP by at least 20% or to a gradient of less than 12mm Hg. However, because WHVP measurement is not widely available, most clinicians aim to titrate the dose of beta blockers to achieve a resting heart rate of 55 beats/min or a reduction of heart rate by 25% from baseline. Unfortunately, beta blockers have some significant side effects, so often the dose is simply adjusted to a maximally tolerated dose. The most common side effects reported are lightheadedness, fatigue, shortness of breath, and impotence in men. Relative contraindications to the use of beta blockers include reactive airways disease, insulin-dependent diabetes (with episodes of hypoglycemia), and peripheral vascular disease.

Patients who meet criteria for primary prophylaxis but who cannot tolerate or have contraindications to beta blocker therapy should be considered for prophylactic endoscopic variceal ligation (EVL). Although studies have been conflicting, a recent consensus panel of experts concluded that both nonselective beta blockers and EVL are effective in preventing first variceal hemorrhage. The decision on whether to treat pharmacologically or via EVL should be based on patient characteristics and preferences, local resources, and expertise.

Nitrates (either alone or in combination with blockers), shunt therapy, or sclerotherapy should not be used in the primary prophylaxis of variceal hemorrhage.

Cirrhotic patients with suspected acute variceal hemorrhage should be admitted directly to an intensive care unit setting for frequent monitoring and aggressive management (Figure 2). While still in the emergency department, initial resuscitation can begin by securing large-bore IVs and sending bloodwork to the lab, including a type and crossmatch for blood products. Volume resuscitation should be undertaken promptly but with caution because vigorous resuscitation can actually increase portal pressures to levels higher than baseline, thereby prompting rebleeding. In our practice we usually start the resuscitation with normal saline and switch to blood or albumin (or both), once available, with the goal to maintain hemodynamic stability. Transfusion of fresh frozen plasma and platelets can be considered in patients with a severe coagulopathy or thrombocytopenia. Low threshold should be taken to intubate the patient for airway protection, particularly if the patient is in shock or encephalopathy, because aspiration of blood often occurs.

Antibiotics are routinely administered in cirrhotic patients who are admitted to the hospital with variceal hemorrhage. Several randomized clinical trials were able to show that antibiotics not only decreased the rate of bacterial infection in these patients but also decreased the incidence of early rebleeding and increased overall survival. The optimal antibiotic and duration is unclear, because benefit was detected from many different regimens. In general, oral norfloxacin at doses of 400mg twice daily for 7 days or IV ciprofloxacin (in patients in whom oral administration is not possible) is the recommended antibiotic. In patients with advanced cirrhosis or at hospitals with a high incidence of quinolone resistance, ceftriaxone at a dose of 1g IV daily may be preferable.

Pharmacologic therapy to decrease portal pressures is critically important and should be considered first-line treatment for acute variceal hemorrhage. It should be initiated as soon as the diagnosis of variceal hemorrhage is suspected and before EGD. The most common pharmacologic agent used in the United States for this purpose is octreotide, a somatostatin analogue that causes splanchnic vasoconstriction. The advantage of octreotide is that it can stop variceal hemorrhage in up to 80% of patients and is nearly devoid of side effects. It has been most widely used as an initial IV bolus of 50 µg followed by 50 µg/hour. This agent should be administered ideally for 5 days, even after bleeding is controlled. Vasopressin (most often used with nitroglycerin) is the most potent splanchnic vasoconstrictor, but it is rarely used for control of variceal hemorrhage due to its multiple vascular side effects including myocardial and mesenteric ischemia and infarction. Terlipressin is a vasopressin analogue that has significantly fewer side effects. It is effective in controlling variceal hemorrhage and reducing mortality. It is administered at an initial dose of 2mg IV every 4 hours and then titrated down to 1mg every 4 hours once bleeding is controlled. Terlipressin is currently used extensively in other parts of the world but is not widely available in the United States.

Even though pharmacologic therapy can be effective at controlling suspected variceal hemorrhage, EGD should be performed as soon as possible to confirm the diagnosis and implement endoscopic therapy. Endoscopic therapy is highly effective and can control variceal bleeding in 80% to 90% of patients. Sclerotherapy, widely used in the past, is now nearly obsolete because of risk of complication and improvement in EVL devices. Indeed, recent consensus determined EVL to be the preferred form of endoscopic therapy for acute esophageal variceal bleeding, although sclerotherapy is still recommended in patients in whom EVL is not technically feasible. Gastric varices, which are often not amenable to either EVL or sclerotherapy, may be more difficult to treat. N-butyl-2-cyanoacrylate glue injected directly into the varix has been shown to be effective for control of bleeding gastric varices. If this agent is not available or in the case of an inexperienced operator, TIPS should be considered as first line therapy.

Despite endoscopic and pharmacologic therapies, variceal bleeding cannot be controlled or recurs in up to 20% of patients. Portal decompressive therapy, either shunt surgery or TIPS, should then be considered. As TIPS has become more widely available, this is becoming the preferred decompressive procedure. However, performance of either TIPS or shunt surgery largely depends on local expertise. Because TIPS and surgery are both invasive procedure with a high risk of complication, they are reserved for patients who fail pharmacologic and endoscopic therapy. A randomized controlled trial recently reported reduced mortality and rebleeding rates with early TIPS (within 48 hours) after variceal hemorrhage. However, this needs to be validated with further studies.

Balloon tamponade applies direct pressure to the ruptured varix and can be highly effective for immediate control of variceal hemorrhage. Unfortunately, recurrent bleeding is common after the balloon is decompressed, and balloon tamponade is associated with potentially fatal complications such necrosis or perforation of the esophagus. Therefore, tamponade should be used only as a rescue procedure and a bridge to more definitive therapy (maximum 24 hours), such as TIPS, in cases of uncontrolled bleeding.

Patients who survive an episode of acute variceal hemorrhage are at high risk of rebleeding and death. If bleeding is left untreated, the rebleeding rate is nearly 60% within 1 to 2 years, with a mortality rate of 33%. Several studies have demonstrated that combination endoscopic plus pharmacologic therapy is the most effective means of preventing secondary bleeding episodes.

In terms of endoscopic therapies, EVL is the method of choice for secondary prophylaxis. After inital control of the bleeding, EVL should be repeated at 1- to 2-week intervals until varices are completely obliterated. This usually requires 2 to 4 sessions. Once the varices are obliterated, EGD is repeated every 3 to 6-months to evaluate the need for repeat EVL. Complications of EVL include chest pain, dysphagia and ulcers that form at the site of the band ligation, which universally form and can cause significant bleeding. Although not definitively proven to be effective, proton pump inhibition is sometimes used in an attempt to decrease the bleeding risk from these band ulcer sites for 2 weeks after an EVL procedure.

Most variceal haemorrhages can be controlled with these measures. However, because acute variceal bleeding often precipitates a clinical deterioration and worsening of liver synthetic function, patients who are otherwise transplant candidates should be referred to a liver transplantation center for a liver transplant evaluation after recovery.