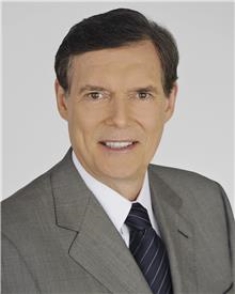 Robert Wyllie, MD, is Chief of Medical Operations at Cleveland Clinic since 2011.  In this position he is responsible for the activities of a variety of units including Business Intelligence, Pharmacy, Continuous Improvement, Hospital Throughput, Surgical Operations, and Critical Care Transport.  Dr. Wyllie also oversees the operations of Service Line Performance Management, driving down the cost of health care while improving quality and enhancing patient experience.

Dr. Wyllie is also a world renowned pediatric gastroenterologist with subspecialty interest in inflammatory bowel disease and complex endoscopic procedures.  He is Board Certified in Pediatrics and Pediatric Gastroenterology and Nutrition, and has been repeatedly named among Castle Connolly’s America’s Top Doctors, Best Doctors in America, and Consumers’ Checkbook Guide to Top Doctors.  Other prominent roles at Cleveland Clinic include Member of the Board of Governors, Vice Chair of the Office of Professional Staff Affairs, and Past President of the Professional Staff.

Dr. Wyllie graduated with honors from the Indiana University School of Medicine, where he also completed a residency in pediatrics and a fellowship in pediatric gastroenterology and nutrition.  Dr. Wyllie earned membership in Phi Beta Kappa while pursuing his undergraduate degree at Indiana University and received the Lyman Mieks Award as the outstanding student in pediatrics.  His wife, Dr. Elaine Wyllie, is a world renowned pediatric epileptologist at Cleveland Clinic, and their two sons are pursuing exciting careers in science and technology.