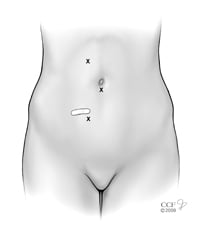 The reasons for the surgery include problems such as constipation and fecal incontinence. These problems may be caused by many conditions. They may be congenital (present at birth) abnormalities that affect the rectum and anus, or they can be caused by neuropathies (nerve supply problems) that result from spinal abnormalities.

How often should the bowels be emptied?

Most people use their ACE once daily, but a few need to use it only every other day. An irrigation may take 30-60 minutes. It is important to stick to a routine and empty your bowels at approximately the same time every day. Approximately 30 minutes after a meal is a good time to empty the bowels, as the colon has increased activity and good clearance of bowels is more likely. 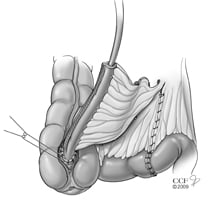 In the surgery, a small passageway is created between the skin of the abdomen and the colon (large intestine). The passageway is made from the appendix (if the appendix has not been removed) or from a small piece of bowel. A section of small intestine is made into a conduit (tube) and is reimplanted into the large intestine. This conduit is brought to the surface of the skin via a small opening called a stoma.

In many cases, ACE surgery can be done using a laparoscopic method that is minimally invasive, so that the patient does not have to be cut open.

What happens after the surgery?

Following the surgery, a catheter (thin plastic tube) will be left in the stoma to keep it open. The catheter remains in place for one month after the surgery. During this time, the catheter should be flushed daily with tap water or a fluid determined by your doctor. Your doctor or nurse will instruct you regarding how to flush out your bowels at home. 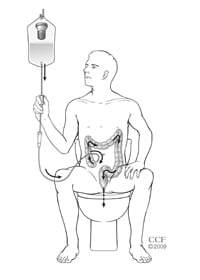 Are there any long-term problems with antegrade colonic enema (ACE) surgery?

There are some people who find that ACE does not work for them. They may find that there is soiling between irrigations or that the irrigations simply do not work. One other problem with ACE surgery is that the opening at the skin can tend to close up with time, particularly if it is not used regularly.

Last reviewed by a Cleveland Clinic medical professional on 12/16/2017.